Stoking the Creative Fires 9 Ways to Rekindle Passion and Imagination

By Phil Cousineau
A soulful examination of all the depths and riches of the process of creativity.

Phil Cousineau is a prolific writer, teacher, editor, independent scholar, documentary filmmaker, travel leader, poet, and storyteller. His lifelong fascination with the art, literature, and history of culture has taken him on many journeys around the world. He lectures frequently on a wide range of topics from mythology, soul and writing to beauty and sports. He is profiled as one of our Living Spiritual Teachers.

An energetic Renaissance man is an ideal guide for this richly developed examination of creativity! Cousineau makes the most of four decades of freelance writing and film work, and reflections from 30 years of teaching creativity in various forms. Three questions lie at the foundation of this exciting journey: "What kind of mark do you want to make? What kind of contribution do you want to make? Why do you do what you do and not something else?" The paperback is organized into three sections on Inspiration, Perspiration, and Realization with a final piece on Recommended Reading and Viewing.

"Inspiration is a flash of fire in the human soul," writes Cousineau about this mysterious quality which animates our creativity. He goes on to say "there is a force within you that breathes divine fire and brings your work to life. Honor it at all costs." It is your imagination. In the first three chapters, the author outlines the stages of this creative journey: celebrating the waking dream of reverie, having the courage to seize the moment, and seeking the wisdom of those who can help you birth what you have imagined. Cousineau peppers these chapters with quotations and observations by the French philosopher Gaston Bachelard, an exercise on Six Ways to Dream with Your Eyes Open, a suggestion by the Beat poet Gary Snyder, commentary on the opening scene of the movie Dead Poet's Society, maxims to live by, advice from Ray Bradbury, an exercise on Solving the Mystery of Time, insights on Leonard Cohen's ballad "Hallelujah," snippets from an interview with Jeremy Irons about his role in Roland Joffe's The Mission, and Nine Ways to Invoke the Muses. The magic, you see, is in the mix of material to spur us onward in the creative journey.

In a chapter on Creative Space, Cousineau shows how important it is to have special place to create in. Virginia Woolf said that every artist needs a room of her own. Joyce Oates is quoted as saying: "I love my study. It's the place to which I return, with myriad daydreams, sketchy memories, scraps of paper." Cousineau suggests four ways to create your own room with asides to Van Morrison, former President Bill Clinton, Emerson, and Rembrandt. He then suggests: "Create a ritual that sanctifies this room. Personalize it by hanging a family photo, travel mementoes, icons from your craft that lend the room a sense of holy mystery."

There are also chapters on focusing deeply on your vision, dealing with the dangers of burn-out, discovering your real work, handling a cooling-down period, and passing the torch from one generation to the next. Cousineau quotes Ansel Adams who said that art is "both the taking and the giving of beauty." The challenge of all creativity is to share with others:

"One of the most creative souls I've ever met was an old Negro League ballplayer named Joseph Charles who lived a few blocks from me in Berkeley, California, in the early 1980s. For thirty years, he was out on his front porch wearing a white glove and waving to passing traffic, calling out, 'Keep smiling!' and 'Have a good day!' He was called 'The Happiness Man,' and when asked why he did it he simply said that life had treated him 'real good' and he wanted to 'pass on those feelings.' " 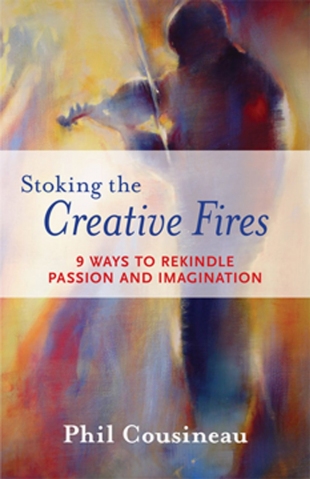