By Tim Farrington
A spiritual exploration of depression, which is often called a dark night of the soul.

Tim Farrington is the author of The Monk Upstairs as well as other acclaimed novels. In this brave and ambitious work of nonfiction, he focuses on his battle with depression since the age of 18. John of the Cross called this malady "the dark night of the soul." Farrington rightly claims that both terms have blurred meanings in our culture and concludes: "The imprecision comes with the territory; the vast country of human suffering remains what it has always been, the wilderness in which the soul must travel, whatever words we use for it."

Dark moods rolled through his life in young adulthood as Farrington tested his creative wings and became "a transcendence junkie." He dropped out of Utah State University and saw himself as a philosophical dharma-bum. Lamenting a series of failed relationships and on a quest for God, Farrington entered an ashram where he did dream work, read Ken Wilber and the Bhagavad Gita, and meditated. He then found his way back to Catholicism and the Centering Prayer movement where he "traded in my Sanskrit mantra for a Sacred Word." But things fell apart when his mother died of cancer in the winter of his 41st year.

In the clutches of grief, Farrington caught pneumonia and then was in an automobile wreck. He wisely observes: "Grief's work is slow work; it is done in God's quiet time; and it requires nothing more of us than our consecrated and surrendered attention. It's not trying to accomplish anything, really; it just wants us to know that grief is love too."

Farrington studies Job, remarries, reads Bernadette Roberts's classic book The Path of No-Self, and suffers more depression before he sees the light: "The blessing in the storm is that, sink or swim, we're in God's hands. You will be graced with the disaster your soul requires to find its way home. There is really nothing for you to accomplish except the ongoing work of trust, patience (a word rooted etymologically in passion, in suffering), and surrender to what is. And what is, is ultimately merciful."

We'll tell you that things take a positive turn for Farrington. You can read about how and why in A Hell of Mercy. We commend the author for opening the doors to both depression and the dark night of the soul and for dealing in a meaningful way with the spiritual practice of surrender to God. 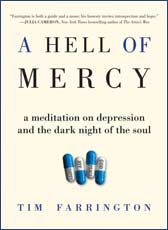