Chants of a Lifetime Searching for a Heart of Gold

By Krishna Das
A fascinating and heartfelt collection of stories, teachings and commentary by the man who has been called the chant master of American yoga.

"When we do kirtan, the practice of what in India is called 'chanting the Divine Name' over the course of a few hours, we are letting go of our 'stories' and offering ourselves into the moment over and over again. Chanting is a way of deepening the moment, of deepening our connection with ourselves, the world around us, and other beings," writes Krishna Das, who has been called "the chant master of American yoga" by The New York Times. In this fascinating and heartfelt collection of stories, teachings, and commentary, he charts his spiritual journey.

In the winter of 1968, Krishna Das mets Ram Dass, who had just returned from India where he was studying with his guru, Neem Karoli Baba (Maharaj-ji). They hit it off big time. Shortly afterwards, Krishna Das dreamed about Maharaji-ji and headed off to India to be with him. Arriving in Bombay, he immediately felt that he had come home. His guru offered him the keys to the kingdom within and drew out the best that was inside him through a love that will not let him go.

Much of this account of Krishna Das's life revolves around his close relationship with Maharaj-ji who loved him, stretched him, encouraged him in his chanting, and provided wise counsel when he needed it most. The three years he spent in India transformed his life. When his guru died in 1973, Krishna Das was shattered, and he succumbed to drug addiction. After more time in India, he started leading chanting in New York City in 1994, a path that is perfectly suited to him and inspiring to others.

Krishna Das tells the story about a Tibetan lama who was visiting Burma:

"At one monastery, he was brought to a temple and told, 'Our guru is in here. He sat down to meditate, and he never moved again. Eventually we covered him over with this stupa (a stone mound).' The monks thought this was a wonderful thing, that their guru had reached a very high state. But the lama shook his head and said, 'Oh, that's too bad.' Surprised, the monks asked, 'What do you mean?' 'He learned to meditate, but he never learned how to live.' "

Krishna Das wants his practice to be about both devotion and living. He finds chanting very liberating and meaningful: it opens the heart and connects us through the Divine with other people and all of creation. As Ramakrishna said: "Every repetition of the Divine Name must have an effect." You can test this out by listening to the CD that comes with the book; it contains a number of chanting sessions with Krishna Das. 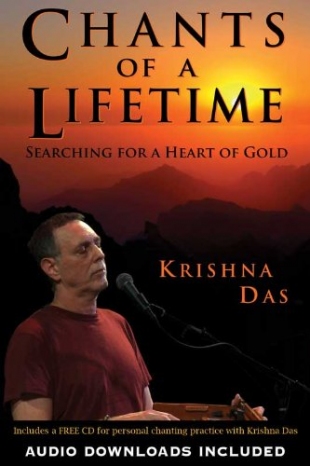