By Ptolemy Tompkins
A thought-provoking overview of the spiritual connections that tie us to our pets and other animals.

Ptolemy Tompkins, the author of four critically praised books, uses the occasion of the death of Angus, his beloved rabbit, as a starting point for an investigation into animals as "genuine soul beings" and the question as to whether or not they will join us in the afterlife. The ancient Egyptians, he points out, mummified their animals so they could serve as companions in the next world. Taoists and Hindus also have kindly views toward animals; the Hindu saint Ramakrishna demonstrated "the inherent holiness of all creation by allowing animals to eat from plates of food set out as offerings to the gods."

The author concludes that in these ancient religions, there is little talk of lording it over animals; instead there is the feeling that we are all in this together. Or as Mahatma Gandhi said: "I want to realize brotherhood or identify not merely with the beings called human, but I want to realize identity with all life, even with such things as crawl upon the earth."

Tompkins paints an interesting picture of primitive societies where animals were seen as spiritual beings and were treated with respect as allies in the web of life. But with the arrival of the planting cultures and the new agricultural spiritual universe that accompanied it, animals came to be regarded as possessions and commodities. Tompkins moves on to a discussion of attitudes towards nonhuman creatures in Judaism, Greek philosophy, and Christianity. There are only a few examples of animal lovers such as Saint Francis who intuitively recognized their soul-being. Much more common is the attitude of Saint Augustine who emphasized the human ability to think as proof of our superiority over other beings.

Tompkins takes the book in a new direction by recounting his experiences while working for Guideposts after he put together a piece titled "Will My Pet Go to Heaven?" The response was overwhelmingly favorable and most readers agreed: Pets do go to Heaven. He shares his understanding of morphic fields, lingering spirits of animals, spiritual science, and animal communicators. Thompkins concludes:

"Do animals go to heaven? After a lot of thinking on the matter, I am convinced that they do. But animals don't simply go to heaven along with us. They go to heaven because of us. We not only meet on the Rainbow Bridge with the animals we love. Seen in a certain light, it is we ourselves who are that bridge. And if ever we should forget that fact, a glance into the eyes of an animal is all we need to remember it."

We guessed early on what Tompkins answer would be but the real delight in reading this provocative book is joining him on the quest and seeing how he deals with history, theology, human nature, stories, personal experience, and friendship across species lines. 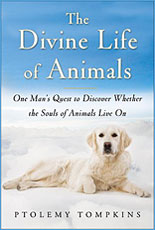