By Ted C. Fishman
A bold and brilliantly written and organized book on the aging of the world's population and what it all means.

Ted Fishman is a veteran journalist whose essays and reports have appeared in many of the world's most prominent publications. In this bold and brilliantly written and organized book, he examines an important but often overlooked phenomenon: the aging of the world's population. Soon, for the first time in history, the number of people over 50 will be greater than those under 17. Here are some signs of this change:

• New health-care companies are being developed to provide seniors with safety devices for their homes so they can continue to live independently.

• Thousands of elderly people have invested their retirement savings in Harley-Davidson motorcycles.

• A Japanese company has designed robot seals for use in nursing homes to calm down patients with dementia.

• Students at Stanford University can enroll in a new undergraduate class, "Longevity," where they will study what longer lives mean for society.

According to the National Institute on Aging, America's population of people between the ages of 75 and 85 hit 17 million in 2010 but will reach 30 million by 2050. Nearly everywhere around the world, the story is the same — fewer kids, more old people. Fishman states: "An aging world adds hundreds of billions of years of collective human life to the burdens of the planet."

This phenomenon draws out some very important questions: Where will the jobs be found for retired people who run out of money? How will senior citizens fill these extra years with happiness and fulfillment? Who will pay for the care of the old? Where will their caretakers come from? How will other generations react to the money, resources, and attention given to the aging population in the coming years? Fishman addresses many of these knotty and difficult questions in the dramatic and thought-provoking reports from around the world coupled with interviews with gerontologists, health-care professionals, government officials, corporate leaders, families, employers, and nursing home entrepreneurs.

The author begins with a fascinating report from Florida which has the oldest population of the 50 states. More than 3.3 million people over 65 — 9 out of every 50 residents — lived in the Sunshine State in 2010. This place has been called "God's waiting room" and that is true for half the people over 65 who have two chronic health conditions. They spend plenty of time sitting in doctors' offices, clinics, and hospitals. Fishman characterizes Sarasota as "a kind of Silicon Valley for aging services." Companies have discovered a variety of ways to serve the older market. Doctors have gotten on board as well in this wealthy community by offering "boutique care": for a large retainer they make themselves available at any time for meeting the patient's needs.

Fishman spends quality time reporting on Japan (the country with the most rapidly aging population) and China (with the largest aging population). Both of them have seen falling birth rates since the 1970s. Many in Japan are worried about the spike in suicides among the elderly. With large numbers of people unemployed now, Chinese officials are anxious about the future (2025) when one-fourth of all the people in the country will be over 65.

There are so many fresh concepts and details about the aging of the world's population in Shock of Gray that it is only possible to mention a few of them:

• the "age arbitrage" in Rockford, Illinois and other towns where older employees are canned for younger and cheaper ones overseas
• the trend of "gerontophobia" in which people think they are younger than they are
• a ten-page section dealing with the signs of aging in people in their 30s through their 80s
• the study of environmental effects on the life span
• the large number of elders who are missing out on the experience of being a grandparent as they continue to play the role of parent
• the words we use to describe how we see the elderly: vulnerable, cherished, frail, kind, bothersome, sweet, expensive, wise, lonely and irrelevant. 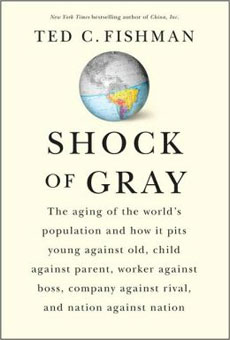