Less Than Human Why We Demean, Enslave, and Exterminate Others

By David Livingstone Smith
A sturdy and substantive philosophical exploration of dehumanization.

David Livingstone Smith is a professor of philosophy and co-founder and director of the Institute for Cognitive Science and Evolutionary Studies at the University of New England. "Dehumanization," he writes, "is a scourge, and has been for millennia. It acts as a psychological lubricant, dissolving our inhibitions and inflaming our destructive passions. As such, it empowers us to perform acts that would, under other circumstances, be unthinkable." This mindset, which enables us to see others as subhuman as "vermin," lies behind the Holocaust, Stalin's slaughter of his own people, the Armenian genocide, the Cambodian genocide, the Rwandan slaughter, and the extermination of villagers in the Dafur region of the Sudan.

Ian McEwan in his novel Atonement writes: "It wasn't only wickedness and scheming that made people unhappy, it was confusion and misunderstanding; above all, it was the failure to grasp that other people are as real as you." Smith uses this cogent quotation as a jumping off point for his sturdy survey of dehumanization theories espoused by Aristotle, Augustine, David Hume, Immanuel Kant, Erik Erikson, Konrad Lorenz, Jane Goodall, and others. He wonders why, even in these secular times, the metaphor of the great chain of being holds sway over so many people in the West. It has enabled racist Americans to justify their superiority over Native Americans, African Americans, and Japanese citizens. It also justifies the right of human beings to do anything they want to animals who are viewed as lower on the ladder of existence.

Dehumanization is, of course, the linchpin of war. Young soldiers are trained to hate the enemy and to view them as predators who deserve to die. This cruel perspective has taken its toll on many soldiers returning from combat with PTSD. Smith brings to this serious study of dehumanization a rich mix of psychology, biology, anthropology, history, and philosophy. And he shows how it even seeps into our discussions of the war on terrorism, abortion, and illegal immigration. Lest we think we are above it all, the author warns us: 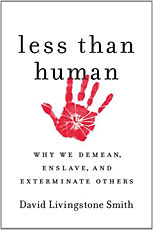