This hard-hitting and thoughtful work is based on seven years of field research into the lives of unauthorized immigrants among three groups: Brazilians, Guatemalans, and Mexicans. This perspective is quite different from the often outrageous media coverage of immigration with its repeated emphasis upon the ideas that immigrants are a burden on the economy, that they take jobs from Americans, that they are closely associated with criminality, and that they will never be able to be assimilated into this society because their values are not the same as ours. Instead of these warped stereotypes, the authors offer "complex stories of heartbreak, survival, work, family, and hope among those who are 'living illegal' in the United States."

With dread of deportation hanging over their heads like a dark cloud, unauthorized immigrants live in fear of civil authorities and cannot participate in civic life. Marquardt and company share stories of their struggles to make the dangerous border crossing and then to face the challenges of daily life in their new destinations in such states Georgia, Nebraska, Iowa, and North Carolina.

With debts accrued crossing the borders and daily costs increasing, the pressure to get a job is constant. Many of those interviewed in this book talk about the transnational nature of migrant life with so much energy devoted to helping those back home. Although the fear of being deported remains very strong, the fear of failure is even stronger among these people who have sacrificed so much to fulfill their dreams.

The authors also take a hard look at the squabbles over bilingual education, racial conflicts, and immigration reform as well as the helpful and hospitable work being done by many churches and the new movements seeking to overcome the politics of fear and to promote change in the immigration system. 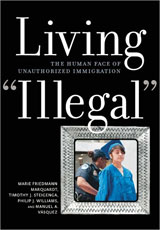