By Jenny Howell, John Howard Yoder, Paul Martens
The spiritual writings of a Mennonite theologian who was a passionate advocate for nonviolence.

"Before it is a social strategy, nonviolence is a moral commitment; before it is a moral commitment, it is a distinctive spirituality. It presupposes and fosters a distinct way of seeing oneself and one's neighbor under God. That 'way of seeing' is more like prayer than it is like a shrewd social strategy, although it is both. It is more a faith than a theory, although it is both." So wrote John Howard Yoder (1927-1997) , a Mennonite theologian who was a seasoned and passionate advocate of nonviolence. This volume in Orbis Books' Modern Spiritual Masters Series contains material selected by and with an introduction by Paul Martens and Jenny Howell.

The vision of John Howard Yoder shines through the selections on the meaning of Jesus, the mandate of the church, a cosmic vision, and practices and practical considerations, such as the importance of medieval pacifism, the power of truth as force, the Eucharist as economic ethics, social creativity as a minority function, and the preferential option for the poor. Yoder believed in a Jesus who demanded imitation in the form of replacing dominion with servanthood and hostility with forgiveness.

We were quite impressed with his essay on "The Cloud of Witnesses," where Yoder pays tribute to his spiritual teachers. We also were very taken by his piece on "Cultivating New Skills," where he spells out the idea that peace must be waged (see the excerpt). 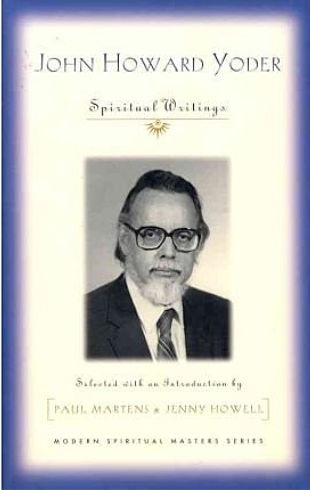