By Tai Moses, Thom Hartmann
A top-drawer collection of essays by talk radio progressive Thom Hartman challenging us to see a new vision of America.

Thom Hartmann is the number one progressive radio and TV talk show host in America. He is also the author of more than 20 books. His visionary work has inspired others', such as Leonardo DiCaprio's movie The 11th Hour. Editor Tai Moses has divided this enlightening group of Hartman's essays into six sections:

According to Moses, Hartmann's core belief is that democracy is the natural state of nature and of humankind. He is a huge fan of Thomas Jefferson and the other Founders who saw the importance of preserving and extending freedom through co-operation and community political participation. Moses also marvels at Hartmann's diversity of interests, his spiritual explorations, his advocacy of the evolution of consciousness, his incredible travels around the world, and his unrelenting attacks on the corporate interests that have taken over our culture and corrupted our politics.

Some of our favorite essays are those on an informed and educated electorate, older and younger cultures, the secret of "enough," the death of the trees, Wal-mart as not a person, medicine for health not profit, and privatizing the commons. The Thom Hartmann Reader hits the mark with its cogent and thought-provoking essays on the urgent challenges of our times. 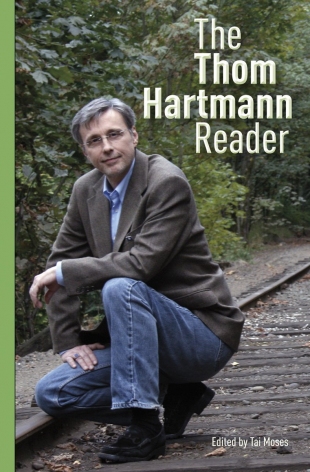