Lazarus, Come Forth! How Jesus Confronts the Culture of Death and Invites Us into the New Life of Peace

By John Dear
A plea for the end of our culture of death and violence using the Biblical story of Jesus raising Lazarus.

John Dear is a Jesuit priest, peace activist, and writer whose last book was Living Peace. He is featured on Spirituality & Practice as a Living Spiritual Teacher. In this paperback, Dear takes a hard look at the Gospel of John's story of Jesus raising Lazarus from the dead. Again and again we are reminded that the gentle man from Nazareth was subjected to the pain, humiliation, and violence of the Roman death culture. He lived an alternative existence animated by compassion, creative nonviolence, and love. Dear offers this meditation on the raising of Lazarus as an invitation to Gospel nonviolence.

In the Gospel story, Jesus arrives to bring his friend back to life. He is confident that the God of love will be triumphant over death. And He is. Dear points to the success of the women's revolution in Liberia as a sign of liberation and resurrection. He salutes the persistence of Twelve-Step programs that hold the promise of a new lease on life. Dear shares his latest run-in with the culture of death and then criticizes the Roman Catholic Church's support for wars and dictatorships, while they eschew Jesus' path of nonviolence. He closes with a tribute to three courageous people who fulfilled Jesus' commandment of love: Ben Salman, a World War II conscientious objector; Dorothy Stang, a nun gunned down for defending the Amazon region and its poor; and Oscar Romero, archbishop of San Salvador, heroic "voice for the voiceless."

Dear sends us a blessing:

"May we hear the call, roll back the stone, and emerge from the world of violence into loving nonviolence. May we live life to the full in resurrection peace and welcome God's reign, here and now, for one and all." 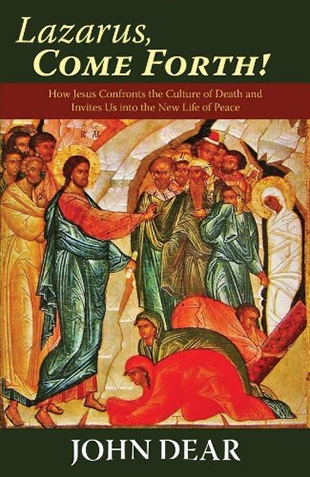