By Stephen Cope
An illuminating and wise guide to vocation and one's true self.

Stephen Cope is a psychotherapist, yoga teacher, and author of Yoga and the Quest for the True Self. He is the director of the Kripalu Institute for Extraordinary Living — the largest yoga research institute in the Western world. Cope has been for many years the Senior Scholar in Residence at Kripalu Center for Yoga and Health in Lenox, Massachusetts, where he writes and teaches about the relationship between the Eastern contemplative traditions and Western philosophy and psychology.

Cope believes that the 2,000 year old treatise on yoga called the Bhagavad Gita is the world's greatest scripture on dharma which has been translated as "sacred duty," "right conduct," or "true nature." In the Hindu tradition, every human being has a unique vocation and one of the major challenges of life is to come home to that true self.

People who have discovered their purpose and mission in life leap out of bed in the morning and are revved up with energy and enthusiasm. They know the joy and exhilaration of bringing forth that which is within them. They are the lucky ones living a fulfilled life.

For explanations of dharma, vocation, karma, and living an authentic life, Cope turns to the words, ideas, and stories of Krishna and Arjuna in the Bhagavad Gita. This bold and enlightening book is organized into sections on each of the four pillars expounded by Krishna:

To broaden and deepen this wisdom from the East, Cope looks to the lives and work of seers who have inspired and enlightened him with their keen sense of purpose and vocation. As a prelude to these exemplars of authentic living, the author presents this quotation by Thomas Merton: "Every man has a vocation to be someone: but he must understand clearly that in order to fulfill this vocation he can only be one person: himself."

Cope has chosen some great souls and done an extraordinary job of cutting to the essence of their great works. Here are some of the truly fulfilled exemplars of dharma he covers:

• Jane Goodall: Trust in the Gift
• Henry David Thoreau: Think of the Small as Large
• Walt Whitman: Listen for the Call of the Times
• Susan B. Anthony: Unify!
• Marion Woodman: When Difficulties Arise, See Them as Dharma
• Harriet Tubman: Walk by Faith
• Mohandas Gandhi: Take Yourself to Zero

At the end of the commentary on Gandhi, the inimitable Indian leader, Cope writes:

And one more point that the author makes in the Epilogue:

"In monasteries of old, the monk's dharma, his purpose in life, was said to be this: to support the choir. In Latin, propter chorum. . . . He was not a soloist. He was not a diva. He was part of a magnificent whole." 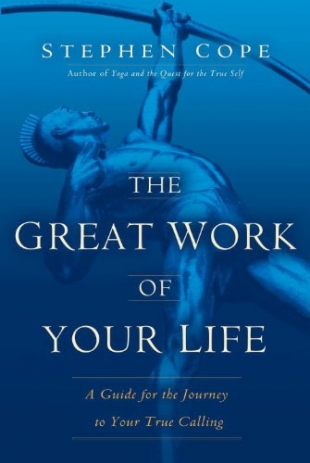