Saracen Chivalry Counsels on Valor, Generosity and the Mystical Quest

By Pir Zia Inayat-Khan
A visionary classic on the spiritual zest and transformative power of the chivalric code.

Pir Zia Inayat-Khan is a scholar and teacher of Sufism in the lineage of his grandfather Hazrat Inayat Khan. He is president of the Sufi Order International and founder of Suluk Academy, a school of contemplative study with branches in the United States and Europe. Together with Shaikh al-Mashaik Mahmood Khan, he leads the Knighthood of Purity of the Hazrati Order. For more information see www.sufiorder.org and www.knighthoodofpurity.org.

In the introduction to this lost book of counsels by Queen Belacane to her newborn son, Pir Zia Inayat-Khan characterizes this oath of chivalry (futuwwa) as a code of honor that "unites Christians and Saracens in a commonwealth of courtesy and conscience." This path is "the way of truth, honor, justice, and largesse."

Those on the chivalry path see prayer as both "a solemn duty and a delicate pleasure." There are five kinds of formless prayers beginning with gratitude, which is seeing the good and giving thanks for it. Other spiritual deeds which are described on these pages are alms (giving freely to the poor and needy), fasting (discipline in the virtue of fortitude), pilgrimage (the advance toward Mecca is "following a current that flows through all the vessels and veins of the earth"), the duty of struggle (as an ordinance of faith), and the challenges of the greater struggle against the entrapments of the ego.

The art of chivalry is built upon reverence and it leads to the spiritual practices of wisdom, courage, temperance, generosity, justice, and nobility. What does wisdom hold within its embrace?

"Every fragment and fiber of creation exists to celebrate the glory of the sacred mystery that stands openly revealed in the panorama of the heavens and the earth. The world is the theatre of the divine revelation, and within this bewildering spectacle you and I, and indeed everyone and all things, are at once spectators and performers, witnesses of the perfection of the Real and embodiments of that perfection, however imperfect we may be. Our purpose is to know and to worship God to the fullest of our powers."

Wisdom also comes from contemplation of the names of God, a smiling forehead and a faithful heart, and an exploration of the Life that lives in you. Another mark of the chivalrous person is courage, which embodies a reliance upon God, a willingness to sacrifice, and strength in the face of death.

Temperance is not a quality of character that is much in vogue today. Yet in the chivalric code it has its honored place as a virtue of reserve, peace, and gravity. Standing alongside it is generosity which is described on these pages as a kindly largesse — giving to and serving others. The counsel on practicing justice is cogent:

"Do not brood over the wrongs that have been done to you, nor seek the cold solace of revenge. Pray, instead, for the souls who wrong themselves by wronging you. They stand in need of your prayers." 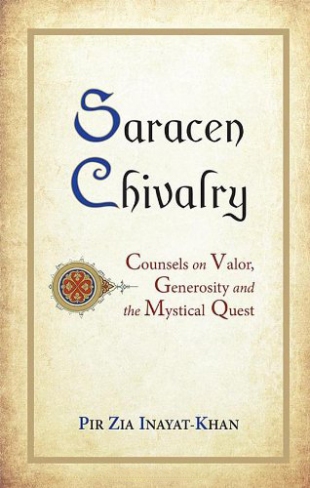