Present Shock When Everything Happens Now

By Douglas Rushkoff
A smart, wide-ranging, prophetic, and useful assessment of presentism.

In his brilliant and prophetic 1970 book Future Shock, Alvin Toffler wrote about a new situation in American society: "the dizzying disorientation brought on by the premature arrival of the future." People were having problems adapting to the pace of change and to the social experience of transience. Job jockeying was creating nomadic families; adhocracies were about to replace bureaucracies; Information was overloading our heads; and science was bringing more novelty with organ transplants, laser beams, and cyborgs. Toffler called for support systems for those overwhelmed by change, including a future-facing education system that would enable individuals to better imagine and cope with the transformations afoot in society.

Now 43 years later, Douglas Rushkoff, a world-renowned media theorist who teaches at New York University and the New School, shares his vision of where we are now: If the twentieth century was characterized by futurism, the twenty-first can be defined by presentism. Everything has come down to the present moment:

"Everything is live, real time, and always-on. It's not a mere speeding up, however much our lifestyles and technologies have accelerated the rate at which we attempt to do things. It's more of a diminishment of anything that isn't happening right now — and the onslaught of everything that supposedly is."

This present shock lies behind the following developments:

• email losing ground to texting,
• blogs fading and Twitter feeds rising,
• youth having trouble with linear arguments,
• narrative structure giving way to reality TV,
• a multitasking brain being incapable of storage or sustained argument,
• dealing with long-term deadlines being replaced with dealing with simultaneous impulses and commands,
• Wall Street traders no longer interested in the future.

Living in the present can be a nerve-wracking experience, or it can become an opportunity to re-frame our understandings of time, story, investing, politics, business, and life. For those of us who are not up on the latest technological toys or media offerings, Rushkoff provides a wide-ranging, intelligent, and helpful overview. In a chapter on narrative collapse, the author discusses The Simpsons and the TV show's appeal to channel surfers; Seinfeld as a former series about nothing; CNN as real-time feeds; and video games as exploration of worlds without stories.

Rushkoff ponders drones and the experiences of those who control them, the meaning of chronobiology, the differences between quantitative time (chronos) and qualitative time (kairos), the widespread use of drugs as "cognitive enhancers," the role of Black Friday, zombie movies, and apocalyptic thinking.

For those seeking spiritual literacy, the practice of living in the present moment is a positive thing; all the wisdom traditions talk of the folly of trying to escape into the past or flee into the future. But as Rushkoff points out, there are many ways in which presentism can turn into a prison. We need to avoid the extreme behavior of always-being-on and recognize the spiritual value of daily Sabbath breaks, moments of pausing for reflection, and times spent in silence. We recommend ancient spiritual practices as helpful antidotes to the enslavements of the digital world. 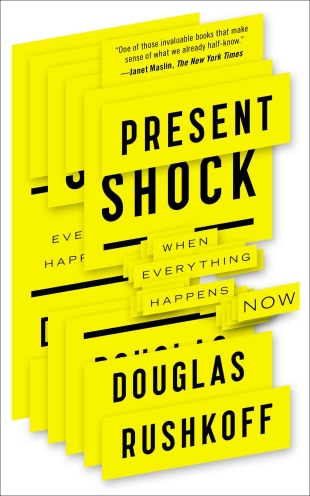