By Howard Gardner, Katie Davis
Thought-provoking report on the App Generation and what technology is doing to their identity, intimacy, and imagination.

The Quest
Howard Gardner is the Hobbs Professor of Cognition and Education at the Harvard Graduate School of Education. He is also Senior Director of Harvard Project Zero, a ground-breaking education research group. His co-author is Katie Davis, an Assistant Professor at the University of Washington Information School, where she studies the role of digital media technologies in adolescents' academic, social and moral lives. To find out more about the App Generation, they interviewed 150 teenagers and young adults in New England, a smaller group in Bermuda, bloggers, high school teachers, and seven focus groups.

The World of Super Apps
The authors reflect on the three aspects in the lives of youth that have been most impacted by digital technology: their sense of identity, their capacity for intimate relationships, and their imaginative powers. Young people can express and probe their identities through social network sites, instant messaging platforms, video-sharing sites, blogs, vlogs, and virtual worlds. For Gardner and Davis the most important question here is whether apps open up or constrain expression. They make these points:

• Youth are expressing themselves with all the new tools at their command but there is a concern among educators and others that it often comes across as selfish, narcissistic, anxious, and frightened of taking risks. These are packaged selves patched together from multiple external sources.

• Apps exist to maximize convenience, speed, and efficiency. Despite the high traffic on the social media, there is evidence that young people are feeling more isolated than ever. Perhaps this can be explained by the fact that most online interactions are not substantive but superficial. Equally disconcerting is the news that the widespread use of apps may be diminishing the face-to-face interaction of youth. It certainly can be seen in the grumblings of parents who complain that family time and closeness have vanished.

• The isolation in the private world also leaks over into the public lives of youth. Evidence of this is in reports that empathy is on the decline. Gardner and Davis ask: "Could viewing the world through our apps be hurting our ability to view the world through another's eyes?"

• Just as apps provide new forms of self-exploration and a plethora of ways to connect with other people, they also supply new means for giving the imagination a workout. On the positive side, they provide ample opportunities for creative collaboration. On the negative side, a dependence on apps hinders the creative spirit that makes its own path without subservience to digital resources.

Light Out for New Territory
Gardner and Davis hope that digital technologies will be developed in the areas of religion, morality, and ethics. They then brainstorm about apps and their use in lifelong learning. In other words, they try to make a case for all of us to become more app-enabled rather than app-dependent like so many youth today. It is time to join Huck Finn and light out for new territories! 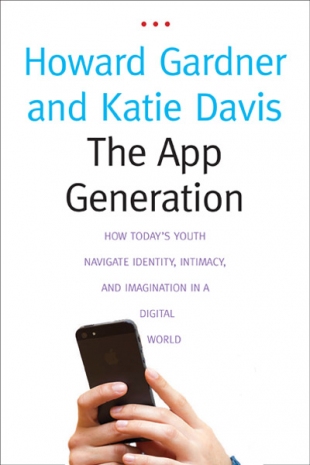