All Rise Somebodies, Nobodies, and the Politics of Dignity

By Robert W. Fuller
An explanation of the lineaments of a dignitarian society.

Robert W. Fuller earned a Ph.D. at Princeton University and taught at Columbia University before becoming the president of Oberlin College at the age of 33. He served for many years as chairman of the global nonprofit Internews. He is the author of Somebodies and Nobodies and has been on the lecture circuit with the intention of building a new civil rights movement to give birth to a "dignitarian society."

While on the road promoting his book about all the egregious forms of rankism, he was stunned by the iceberg of anger he encountered over the ways in which bosses, managers, leaders, and others were lording it over those they viewed as their underlings and inferiors.

Fuller believes that the hallmark of a dignitarian society will be the interpersonal, cultural, and institutional relations that provide recognition and dignity for all, regardless of circumstances or rank. The author flexes his imagination and presents 10 ways to combat rankism in the workplace. He then moves on to education where there is a discussion of anti-bullying projects and the banishment of elitism in academia. He envisions dignity as a centerpiece of health care and then struggles with rankism in the highly problematic arenas of the social contract and democracy. Two formidable enemies of a dignitarian society are fundamentalists and conservatives who line up on the other side in any discussion of a less aggressive foreign policy.

The movement Fuller wants to encourage is only in its infancy, and he hopes that it will take hold as more and more people support equitable compensation, create "indignity-free zones, " adopt a "no nobodies" policy in schools, and show the world the dignity it deserves. 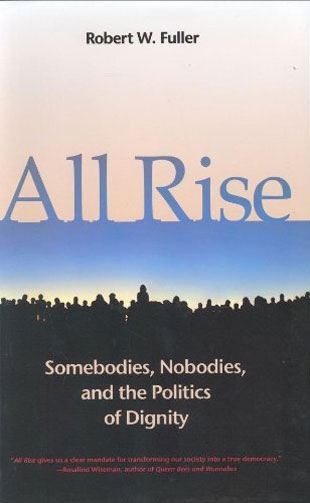