By Terrance Keenan
A radiant and lyrical mix of edifying meditations and pensive poems.

Terrance Keenan is an Irish artist, writer, and Zen Buddhist monk. He was formally a university lecturer, independent bookseller, special collections librarian, and senior monk at the Zen Center of Syracuse. He has published four books of poems.

As you can discern from Keenan's varied job description, he is a very versatile Buddhist who has created an unusual Zen approach to life and experience. Two additional bits of information are that he went into rehab 12 years ago and has been working at recovery ever since. And he has Graves' Disease, a hyperthyroid condition rare in men.

In a series of meditative essays interspersed with his poems, Keenan muses on anger, the end of linear certainties, the fantasy of perfection, giving up the intellect as home, living in stardust, and arriving in the irreligious dark.

There are so many glints of wisdom in this book. Here are just a few.

• A woman counselor tells Keenan to sit a while with "No Blame." That means you can't blame your parents, your past, him or her, sex, addiction, or bad luck. Take blame out of the equation and things seem better.

• "In Japan there is a custom called Osaki-ni. It is a kind of deep courtesy in which one apologizes for the grief one can cause another. It is especially so in cases over which we have no control, such as death. You know your parting will cause others sorrow, and you thus express your sorrow at having to be the first to go. In it blame vanishes."

We heartedly recommend to you Terrence Keenan's Zen approach to everyday life. The snatches from his trials and tribulations and his pensive poems are added value. 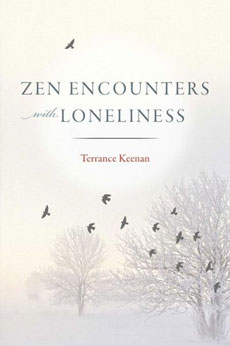