Enchanted Objects Design, Human Desire, and the Internet of Things

By David Rose
An exciting description of a world transformed by objects with extraordinary powers.

In "Handle Your Things With Care," we wrote about relating with more love, care, and concern for the "things" in our lives such as tables, chairs, tea pots, lamps, refrigerators and so on. We began the piece with the following:

"There is a rich and soulful emphasis in the world's wisdom traditions on respecting inanimate objects. Many Christians see the sacramental value of things as signs of God's presence; Jewish mystics speak of the divine spark that resides in everything; Hindus take great pleasure in ordinary objects as manifestations of Brahman; Sufis kiss cups and musical instruments as part of their practice of adab; and Native Americans and Confucians show courtesy for all things as part of their way of living."

We noted that there is a valid ethical critique of an over-emphasis upon materialism, but this need not mean we must give up our reverence for things. Two of S&P's Living Spiritual Teachers, Shaun McNiff and Thomas Moore advocate "soulful materialism" where the objects in our homes are cherished for their beauty, expressiveness, and creativity. As French Catholic priest Pierre Teilhard de Chardin reminded us, "things have their within." We have long held this view, which was why we opened our book Spiritual Literacy with a chapter on "Things."

Those are some reasons why we couldn't wait to crack open David Rose's Enchanted Objects: Design, Human Desire, and the Internet of Things, and it met our high expectations. It forecasts a rich and meaningful increase in the interdependence between human beings and the tools, appliances, devices, toys, and play things in our lives. Rose is an award-winning entrepreneur and instructor at the MIT Lab, specializing in how digital information interfaces with the physical environment. He is the inventor of several devices — but more on that later.

With his creative flair and technological insights, Rose could have chosen to devote his time and talent to screen-based interfaces like the next generation of smart phones; to prosthetic and wearable technologies; to the lively world of animism or living with social robots. But he decided to work with enchanted objects.

These things start out as ordinary — a pen, a wallet, a shoe, a lightbulb, or a table. This ordinary thing is then "augmented and enhanced through the use of emerging technologies — sensors, actuators, wireless connection, and embedded processing — so that that it becomes extraordinary. The enchanted object then gains some remarkable power or ability that makes it more useful, more delightful, more informative, more sensate, more connected, and more engaging, than its ordinary self. As the ordinary thing becomes extraordinary, it evokes an emotional response from you and enhances your life."

Our possessions are now destined to be endowed with mysterious and magical powers, a development that promises to change forever the ways in which we relate to them. An enchanted pen has been created that is a writing instrument augmented with a camera, a microprocessor, and a wireless connection. An enchanted shoe that is both fashionable and functional records your steps, charts your pace, measures the stability of your gait, and serves as a cheerleader to get you to exercise regularly. An enchanted lightbulb changes color as your home energy usage increases or decreases, spurring you toward resource conservation.

Tech gurus predict that by 2025, our lives will be transformed by these high-tech objects. Rose believes that these enchanted objects address the six human drives for omniscience, telepathy, safekeeping, immortality, teleportation, and expression. He is also convinced that the idea of "enchanted objects" speaks to the child in us who is enthralled by fables, myths, superheroes, science fiction, and fairy tales. Think of Mrs. Wesley's magic clock in Harry Potter.

We were delighted to read about the author's inventions of GlowCap, a medicine bottle that lights up to remind you to take your pills; the Google Latitude Doorbell which plays a special ringtone as each member of the family heads home, so others can anticipate their arrival; and the Ambient Umbrella that knows when it is needed and tells you when it's going to rain.

Other enchanted objects on the horizon include tables that listen, furniture that melts into the wall or floor when it's not needed, and a sensor that tries to keep plants thriving by monitoring light, moisture, and chemical contents of the soil. Rose lauds the Seven Abilities of Enchanted Objects before moving on to the things that they can do for homes, workplaces, and cities.

Jean Baudrillard has written: "Strictly speaking the humans of the age of affluence are surrounded not so much by other human beings, as they were in previous ages, but by objects. Their daily dealings are now not so much with their fellow men, but rather — on a rising statistical curve — with the reception and manipulation of goods and messages." The time is ripe right now for us as spiritual people to begin thinking seriously about how our relationship with things will change with the arrival of enchanted objects. Will we be glad to experience a deeper emotional connection with our possessions? Will we be threatened by their magical powers or grateful for their presence in our busy lives? Who among us will put together the first book of etiquette for dealing with these enchanted objects? How will we best express our love and respect for these high tech objects?

Put all of these questions and projects together and they give us a glimpse of what is coming soon — the Thingiverse (a term coined by David Rose) "where objects can be treated as equal to humans." Here is where our reverence — or radical respect for things — can shine. 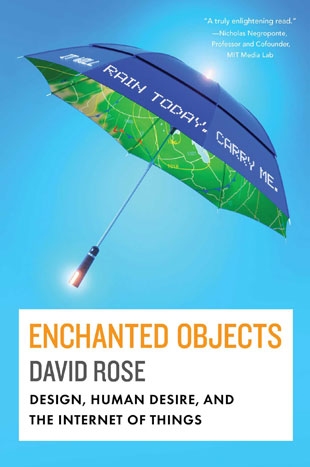