By Kay Whitlock, Michael Bronski
A call for an ethic of interdependence and accountability, a commitment to the expansion of the Commons, and a radical and compassionate embrace of the neighbor to counter hatred and violence.

In a Nutshell: The systemic violence against Native peoples, black people, and immigrants has left a permanent stain on American history. In order to combat hate crimes in our times, we have relied upon government-based policing, increased surveillance, and an extensive prison system. This battle against "extremists" and pariahs has proven to be dangerous and harmful to the health of the nation. It has intensified institutional violence. Whitlock and Bronski challenge us to deepen the conversation to include the meaning of civic goodness, collective responsibility, and the pursuit of justice.

About the Authors: Kay Whitlock is a progressive activist and independent scholar who has spent much of her time writing about a broad range of social and economic justice issues. She is also a Buddhist practitioner with an abiding interest in anti-racism work, feminism, environmental struggles, and an emergent lesbian and gay rights movement. Michael Bronski has been involved since 1969 in gay liberation and for most of his life has been a writer, journalist, independent scholar, activist, and organizer. Together, they yearn for a larger national conversation on the true nature of violence and injustice; they believe this discussion must examine what it means to be human, to reflect goodness, and to seek justice.

Sum and Substance: Dehumanization and violence are rampant in American society dressed up as business-as-usual. Popular culture has a huge impact on how we think about justice, goodness, and fairness. For a long time now, Hollywood films have explored and, in many cases, advocated revenge and the idea of redemption through violence. Many popular movies emphasize the dualism of "us" against "them" which has perpetrated the idea of endless war, Nativism, and other warped views.

The authors do a fine job discussing the film Rosewood as a parable about moral responsibility, racism, and massive harm. They call for an ethic of interdependence and accountability, a commitment to the expansion of the Commons, and a radical and compassionate embrace of the neighbor.

Goodness Defined
"An awareness, translated into action, of the intrinsic worth and interdependence of all peoples and ecologies, and the determination to dismantle social structures that support social inequalities and the violence that accompanies them."

Justice Defined
"The evolving pursuit of trustworthy, respectful, and non-exploitative relationships, together with accountability for interrupting, preventing, and redressing violence, in its myriad form, against individuals, communities, and ecologies."

The Excluded
"All paradises, all utopias, are designed by who is not there, by the people who are not allowed in."
Toni Morrison

A Mob Inside Us
"A mob always begins inside us; never is it an outside job. Always it is an inside job: the troublemakers are there, but they are inside you and me."
Lillian Smith

If You Like This Book You'll Also Want to Read

• Worse Than War: Genocide, Eliminationism, and the Ongoing Assault on Humanity by Daniel Jonah Goldhagen

• Border Patrol Nation: Dispatches From the Frontlines of Homeland Security by Todd Miller 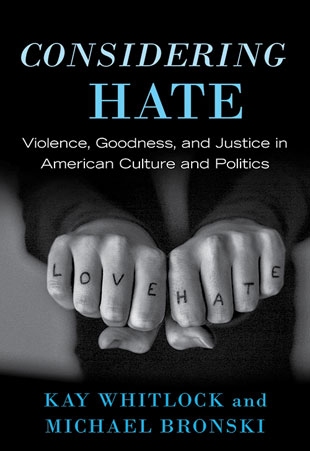