Reclaiming Conversation The Power of Talk in a Digital Age

By Sherry Turkle
Keen insights into our excessive use of smartphones and other devices that distance us from the treasures of face-to-face conversations and the practice of empathy.

"Conversation is on the path toward the experience of intimacy, community, and communion. Reclaiming conversation is a step toward reclaiming our most fundamental human values," writes Sherry Turkle who has been studying the psychology of people's relationships with technology for the past 30 years.

She is Abby Rockefeller Mauze Professor of the Social Studies of Science and Technology in the Program in Science, Technology, and Society at MIT and the founder and current director of the MIT Initiative on Technology and Self. She received a joint doctorate in sociology and personality psychology from Harvard University and is a licensed clinical psychologist. Her last book, Alone Together completed a trilogy of books on the various ways in which human beings interact with technology; the first two were The Second Self and Life on the Screen.

This brilliant and incisive book charts one of the most troubling developments of these times: "When we have our mobile devices with us, we see that we turn away from our children, romantic partners, and work colleagues." Even though much has been made of the manifold ways in which we seek to stay connected to each other, most of the individuals Turkle interviewed admitted that they would rather send an electronic message than subject themselves to a face-to-face meeting or a telephone call. What is going on here?

Turkle discovered that those who spent a large amount of time communicating through devices were often impatient and irritated by real people and their unpredictable habits and behavior. These smartphone devotees have talked themselves into the idea that they have more control of their time and self-presentation online than anywhere else. They can edit and retouch themselves in their own little world. Turkle calls this "the Goldilocks effect: We can't get enough of each other if we can have each other at a digital distance -- not to close, not too far, just right."

Many youth experience the effects of digital addiction: They cannot go more than two minutes before checking their phones to see if they have any messages and who is texting them. They are often bored once the constant stream of information and entertainment flooding their bodies and brains slows down or turns off. Talking with a real person or listening to an erudite lecture or watching a slow-moving movie is unappealing. They prefer and constantly need stimulation.

Turkle is most upset by what she sees as the empathy gap that has arrived with the dominance of digital communications. Researchers have discovered a 40 percent decline in empathy among college students. It is one of the character qualities of those who are fully present to each other in face-to-face communication. Some educators are convinced that this diminishment of empathy can be rectified by apps for smartphones to encourage walking in another person's shoes.

Turkle plunges onward with substantive, highly ethical, and thought-provoking sections on solitude, family, friendship, romance, education, work, society, and robots. She looks at solitude as a seedbed for the return of empathy; the complaints of children that their parents ignore them by spending so much time on smartphones; the need to create device-free sacred spaces and to cultivate daily habits of conversation; how friendship for many teens consists of talking about what is on their electronic devices; the practice of multitasking as "a performance degrader" in the workplace; and the incursion of everyday tracking of our lives and purchases and habits via electronic devices.

Turkle has written another masterwork on the challenges we face as we try to reclaim conversation, restore our practice of empathy, and give more attention to deep reading. 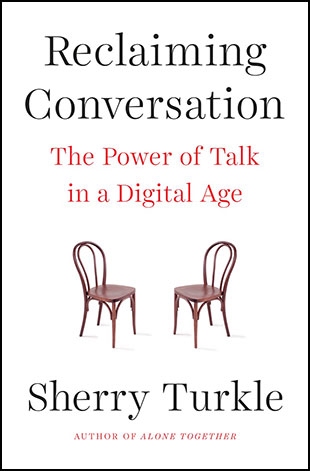