The Genocide Contagion How We Commit and Confront Holocaust and Genocide

By Israel W. Charny
A thought-provoking tome on the human capacity to commit genocide.

"Genocide is the most extreme of all crimes against humanity," writes Israel Charny, an Israeli psychologist and genocide scholar. In academic literature and international law this term refers to the killing of a particular national, ethnic, racial, or religious group. These horrific acts contain "severe blows to human rights, extreme displays of indifference to human suffering, and severe moral breakdowns of humanity."

According to Charny, we are all capable of participating in genocide even though a capacity for good dwells within us as well. Throughout the book, Charny examines a multifactor model for understanding the human capacity to commit genocide. He calls it the "Foundations of Evil":

"1. Projecting onto others and sacrificing them as scapegoats
2. The human need for power and the inherent dangers of addiction to power
3. Defense of territory and human interests by dehumanizing others.
4. Doing what is expected of me, being like everyone else
5. "Going with the flow"
6. Seeing while remaining unseen
7. The lure of the "golden calf"
8. Desires for excessive power and taking pleasure in controlling others: adopting the roles of jailers-authorities who keep people in their places
9. Total commitment to a divine call of ideology.
10. Sacrificing the other — the ultimate sacrifice is taking the life of another person for one's own benefit.
11. "These things never happened" — denying wrongdoing in others.
12. Innocence and the flawed management of mind processes."

Other serious subjects explored in The Genocide Contagion include attributing demonic powers to enemies, small-mindedness (a reduced sense of responsibility), orgiastic experience in a collective, and the folly of nihilism.

Genocide is not a "thing of the past." It's happening in war zones around the world and is hinted at in political speeches by right-wing ideologues. That's why this eye-opening book is so important. 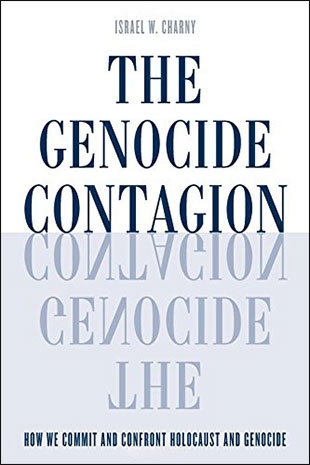