By John B. Cobb, Jr.
A call for Progressive Christians to create centers of resistance.

In his foreword to this important paperback, process theologian John B. Cobb, Jr., who served as its editor, defines "progressive Christians" in this way:

"Progressive Christians are those who stand in the liberal, social gospel tradition as it was later transformed through the influence of Niebuhrian criticism and also as by liberation theologies, especially those developed in black, Latin American, and feminist circles. We have also been deeply affected by our awareness of the ecological crisis and the contribution that traditional Western theology has made to it, as well as by our increased understanding and appreciation of other religious traditions and indigenous spirituality."

Progressive Christians (still mainly middle-class Euro-Americans) believe that the time has come to follow in the footsteps of the early Christian communities that became centers of resistance toward the violence and power plays of the Roman Empire. Cobb asks the relevant question: "We are called to resist. But what form can or should such resistance take?"

The essays here were written as position papers for Progressive Christians Uniting, an independent ecumenical organization in the Los Angeles basin. The opening piece by George Pixley proclaims the Biblical mandate to resist the dominant forces in our world. That is followed by Lois McAfee's affirmation of prayer as a necessary practice giving activists the strength to resist. (See excerpt.)

Five critical essays lay out what must be dealt with and changed: Gordon Douglass and Ward McAfee on consumerism; Gordon Douglass on poisonous inequality; John Cobb on imperialism and scientism; and Lee McDonald on global warming. It will take a heap of wisdom and energy by committed and disciplined activists to turn around these entrenched
problems and societal shibboleths.

The next section of the book highlights "Theologies of Resistance." George Pixley chimes in with an essay on Latin American Theology, and Rosemary Radford Reuther examines the resources of Feminist Theology. The ethical parameters of resistance are assessed in Lee McDonald's "The Church and Politics" and his "Forgiveness and Reconciliation. "

In the closing section, Gordon Douglass cheers those who are willing to oppose the powers that be with resistance that is countercultural, open to reform, and down-to-earth in its practical aspects. For more on this agenda visit www.progressivechristiansuniting.org. 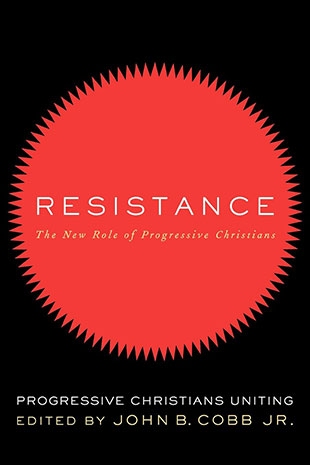