By Vicki Mackenzie
An engrossing biography of a spiritual trailblazer who was the first Western Tibetan Buddhist nun.

Freda Bedi was 30 years old when she was sent to prison in Lahore in British India. The time she spent there was recorded in a diary, which was later published as the book Behind Mud Walls. She wrote:

"My cell mates are quiet, determined souls, not noisy rebels, the stuff of which Gandhi's little army is made. They are not professional politicians, but widows and married women who have left behind their children, husbands, and households to offer themselves up (for arrest) in service of their country."

She felt right at home among them. This trailblazing white woman grew up in poverty in England. She received a scholarship to Oxford's St. Hugh's College for women. After hearing Gandhi give two lectures at Oxford, she was moved to join the movement for Indian independence. In India, Bedi married a Sikh from the Punjab who shared her penchant for activism. After her wedding, she would never wear Western clothes again. She saw herself as an Indian.

Zealously speaking to crowds of thousands, Bedi was selected by Gandhi to be one of his satyagrahis, an individual whose commitment to the path he authenticated. She was the first British woman to receive such an honor.

Following India's independence, Bedi and her husband spent years working with refugees and living close to the land in huts. She studied meditation and familiarized herself with the world's religions, only to eventually become a Buddhist. At the age of 49 she found a teacher in the Kamapa and convinced him that Buddhism should be taken to the West. That required teaching monks and nuns English. The indefatigable middle-ager then established a convent for nuns and a school for tulkus.
Her spiritual teacher said Bedi was "an emanation of White Tara." (the female Buddha of Compassion in Action.)

Last but not least, this extraordinary spiritual pioneer was a mentor to Chogyam Trungpa Rinpoche, the Tibet-born teacher who became a pivotal figure in presenting the Buddhist dharma to the Western world. As the founder of the Naropa Institute in Boulder, Colorado, he was respected as a meditation master, scholar, and artist. Vicki Mackenzie has written an engrossing and dramatic account of an extraordinary spiritual adventurer who lived the equivalent of four or five lifetimes all packed into one! As she did with Cave in the Snow: A Western Woman's Quest for Enlightenment, the stellar biography of Tenzin Palmo, the second Western woman to become a Tibetan Buddhist nun, Mackenzie stirs our souls by giving us a vivid portrait of a disciplined and dedicated life. 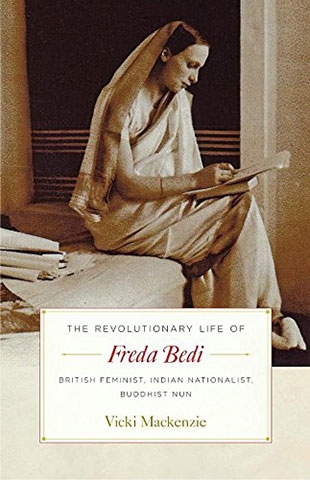