By Naomi Klein
A ray of hope for stunned and benumbed progressives from the award-winning journalist.

"What's extraordinary about Donald Trump's presidency is that we are all inside the Trump branded world, whether we want to be or not. We have all become extras in his for-profit reality TV show, which has expanded to swallow the most powerful government in the world," writes Naomi Klein, an award-winning journalist, syndicated columnist, documentary filmmaker, and author of the international bestseller This Changes Everything: Capitalism vs. the Climate. That sharp-edged book presented a cogent and brilliant overview of global warming and its economic and political ramifications; we gave it an S&P Book Award in 2014.

Many Americans will nod their heads in agreement as Klein shows how the country's culture has provided the seedbed for Trump's reign of power and underscored the principles he promotes: "That greed is good. That the market rules. That money is what matters in life. That white men are better than the rest. That the natural world is there for us to pillage. That the vulnerable deserve their fate and the one percent deserve their golden towers. That anything public or commonly held is sinister and not worth protecting. That we are surrounded by danger and should only look out for our own."

Klein's greatest fears grow out of Trump's cabinet comprised of "masters of disaster" who are hell bent upon the destruction of the public sphere and the public interest; the shock of involvement in another war as a means of silencing critics; the full-fledged attack on scientists and others who have warned about the threat of climate change; the limiting of civil liberties in order to advance the President's agenda, which includes stirring up fears about immigrants, blacks, pro-life men and women, and homosexuals.

On a more positive note, the author finds shards of hope in her coverage and commentary on the struggle at Standing Rock, North Dakota, where activists dared to dream once again. Klein also presents the "Leap Manifesto," a document drawn up in 2015 by Canadian activists espousing "a platform without a party."

This practical guide to the ever-changing "political zeitgeist" is a welcome sign that progressives might work together in a grass-roots resistance that applies its creativity and ample energies to protecting the planet and sustaining life on Earth. 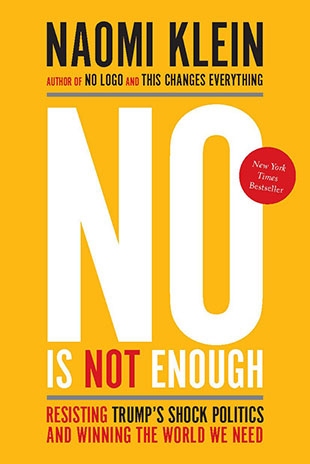