This Changes Everything Capitalism vs. The Climate

By Naomi Klein
A cogent and brilliant overview of global warming and its economic and political ramifications.

The recently released UN report "Climate Change 2014: Impacts, Adaptation, and Vulnerability" makes it clear that the effects of global warming are already here with food shortages, droughts, and violent weather patterns taking place around the world. According to the U.S. Environmental Protection Agency, global emissions increased by about 1.5 times from 1990 through 2008. Although we call this planet home we have continued to defile its land, water, and air. In this century we have already seen the chaos climate change can bring: high temperatures in Europe, forests burning down in the United States, droughts in Australia, and rampaging floods in Thailand. Unless something is done soon we face ever more global catastrophes.

Many frightened, angry, and disappointed people are in deep denial about climate change and avoid thinking or talking about it. According to a April 2014 Gallup poll, a majority of Americans still register low levels of concern about the impact of climate change. A little more than a third of those polled said they worry "a great deal" about climate change or global warming, putting the phenomena at the very bottom of a list of eight environmental issues addressed by the survey.

Recent polls have shown that many Americans do see climate change as a serious threat in the future, but they think they will be long gone before it happens; they are just not worried now. A Pew poll last year found that people in other countries are much more concerned about climate change than their American counterparts. Meanwhile, the worry expressed domestically on the subject is "essentially the same as it was in 1989," Gallup said.

Naomi Klein is an award-winning journalist and the author of the critically acclaimed #1 international bestseller The Shock Doctrine: The Rise of Disaster Capitalism. We reviewed the documentary based on the book directed by Michael Winterbottom and Mat Whitecross; it lays bare the power plays of the rich and powerful who have promoted their brand of free-market policies by capitalizing on catastrophes and weakened governments and peoples. Klein is a contributing editor for Harper's magazine, a reporter for Rolling Stone, and a syndicated columnist for The Nation and The Guardian..

This new book is a cogent and brilliant overview of global warming and its economic and political ramifications. Despite the frequency of climate-related disasters and the deluge of reports by scientists on the gravity of global warming, the spark needed to passionately spur citizens and their political representatives to action has not yet happened. Klein writes:

One of the major obstacles to turning things around is that this global crisis is so complicated. Klein looks at a proposed Marshall Plan for the Earth, a collaborative partnership between environmental groups and businnesses; geoengineering projects; and commitments to change their ways by countries with higher emissions. Large numbers of those in denial are opposed to these changes which they see as nothing more than another attempt by liberals to advance their causes of the redistribution of wealth, higher taxes, government intervention, and regulation. Klein reminds us of a 2013 report in The Guardian revealing that a network of anonymous U.S. billionaires between 2002 and 2010 donated nearly $120 million to groups casting doubt about the science behind climate change.

Who are the real heroes and warriors during this period of capitalism's growth when the majority of citizens are stuck in a rut of old and rigid behaviors? "Blockadia" is the name Klein gives to those people "at the forefront, packing local council meetings, marching in capital cities, being hauled-off in police vans, even putting their bodies between the earth movers and the earth." They are a diverse community: local shop owners, college professors, high school students, grandparents. They include supporters of the anti-fracking and anti-mountaintop removal movements, and indigenous peoples trying to protect their sacred sites from oil and mining company harassment and invasions. Klein respects the willingness of these people to sacrifice for the common good. The author closes with a high and holy note of affirmation:

"Any attempt to rise to the climate challenge will be fruitless unless it is understood as part of a much broader battle of world views, a process of rebuilding and reinventing the very idea of the collective, the communal, the commons, the civil, and the civic after so many decades of attack and neglect."

Stephen Greenblatt, a Harvard humanities professor has used the term "swerve" to describe a major historical change in consciousness that is neither predictable nor orderly. Klein does a masterful job describing the swerve that is underway in small but poignant ways as ordinary citizens take stands and do what they can to reduce gashouse emissions, protect the planet and its beings from exploitation, and find ways to sustain life on Earth. 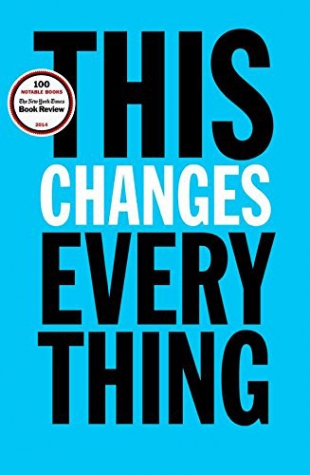