By Mary Mann
An inventive collection of essays probing modern restlessness and alienation.

Boredom is like a fog that periodically moves in and drenches everything with a mist making it hard to see clearly. Spiritual writer Sam Keen calls it "the common cold of the psyche," whereas many psychologists take it more seriously, seeing it as a prelude to depression. In this intriguing and inventive collection of essays, Mary Mann probes the emotion which is the source of restlessness and alienation in the lives of so many modern people.

More than 70% of Americans, and more than 80 % of people worldwide, are bored or actively dislike their jobs.

"Boredom is an emotional signal that makes people very aware that in their current situation there is a lack of purpose," social psychologist Wijnand van Tilburg has observed. Mann points out that fourth century monks in Egypt were early documenters of boredom with their descriptions of its power to engender "lassitude of body." The author, whose writings have appeared in The New York Times, Smithsonian, The Believer, and the Los Angeles Review of Books ranges freely in her coverage of this subject with commentary on the efforts of Thomas Cook, pioneer of the tourist business for England's working class; burned-out soldiers passing time in Iraq; prisoners punished in solitary confinement; and modern-day couples seeking ways to spice up their sex life.

According to Billy Wilder, the first rule of filmmaking is "Thou shalt not bore."

We were immensely impressed with the treasure-trove of facts, stats, and quotes which Mann has gathered to spark our interest and appreciation of boredom's many incarnations -- both positive and negative. We also got a few laughs out of it, and that's always a good antidote to boredom.

Queen Elizabeth's party planner Lady Anson advises: "Seat all the bores together. They don't realize they're the bores, and they're happy." 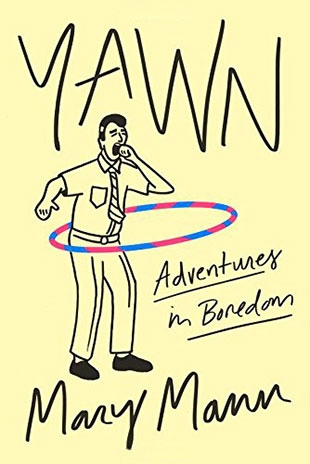 An interview with Mary Mann -