Have Black Lives Ever Mattered?

By Mumia Abu-Jamal
A prophetic witness to the pain and suffering of people of color perpetrated by the police, the courts, and the prisons.

There is fire and fury in the writings of award-winning journalist Mumia Abu-Jamal about the violence unleashed upon people of color. Here is the voice of a prophet speaking truth to power from his prison cell where he has spent decades defending his innocence in the murder of a policeman. This disturbing circumstance makes his coverage and distress over legalized police violence even more convincing.

Abu-Jamal covers the soulscape of America with commentary and spiritual insights into the highly militarized police force operations, the beatings and batterings of people of color in the streets of our cities,
the incarceration of over two million blacks who have been turned into cheap labor for money-making prisons, the brutal treatment of those who are put in solitary confinement, and last, but not least, the final ignominy of capital punishment.

Abu-Jamal tallies up the rampant injustice, racism, and violence launched against his people. His laments what has happened in the past and encourages us to find teachable moments where we can align ourselves with other outraged citizens to find ways to activate the soul of America. The underlying message we took from this book: Now is the right time to sharpen our appreciation for the idea and the ideal of this diverse country as "the land of the free." 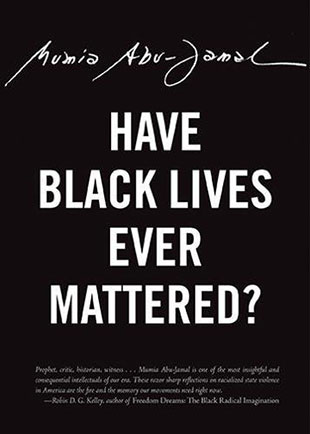