The Evolution of Imagination

By Stephen T. Asma
A fascinating exploration of the imagination and improvisation in all creative activities.

Stephen T. Asma is Distinguished Scholar and professor of philosophy in the Department of Humanities as well as Fellow of the Research Group in Mind, Science, and Culture at Columbia College Chicago. He is the author of several books including On Monsters and Against Fairness.

"Improvising in a jazz band, or medical triage unit, or a soccer team requires shared intentionality of a high order. We are a call-and-response, turn-taking species. The tenor horn blows a blues riff, and the piano responds by mimicking the phrase; the dancer leans in with his hip and his partner curls slightly in response. Just like a jazz musician, the early improviser had to be very sensitive to the volitions of others around him,” writes Asma as he pinpoints the amazing source of human imagination, freedom, and meaning.

Using personal anecdotes, references from genetics and psychology, and insights from neurology, biochemistry, sensory perception, and the emotions, the author explains the biological basis for imagination. He maps the energetic flow of creativity and ponders the evolutionary dynamics of collective action and embodied expression.

Asma's ability to blend philosophy with his observations as a musician and jazz player opens the doors to the hallmarks of the improvising mind-set — fluid responsiveness, toleration, and a level of comfort with failure and ambiguity.

While reflecting on these bounties, we can try to understand the greatest threats to human flourishing today are wealth inequality, environmental degradation, and dogmatism. Imagination is the “ancient operating system at the root of cognition and culture." According to Asma, it forges and expands actions in everything from hunting to performing to athletic activities and to conversation. It resuscitates perception and action and serves as a workspace to foster valuable behaviors, tools, and narratives.

The Evolution of Imagination is an inventive assessment of this spiritual practice which shines a light on the dynamics of improvisation in all creative activities. 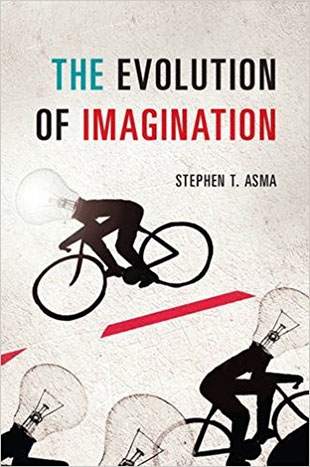 The University of Chicago Press, 6/17