Rumi's Secret The Life of the Sufi Poet of Love

By Brad Gooch
A remarkably detailed biography of the Sufi mystic's life and work.

Brad Gooch is a poet and novelist and author of two acclaimed biographies, City Poet about Frank O'Hara and Flannery: A Life of Flannery O'Connor, which was a finalist for a National Book Critics Circle Award in Biography and a New York Times bestseller. While researching Godtalk: Travels in Spiritual America, he began participating in a Sufi circle in New York. They were reading the poetry and discussing the spiritual talks of the 13th century Persian mystic Rumi. Gooch had already been reading Rumi and now he decided to study him more intensely. In order to get closer to Rumi's language, he took Persian language classes and began to do his own translations. (All the translations in this book are Gooch's in collaboration with the Iranian-American writer Maryam Mortaz.) As further research, he traveled to the significant places in Rumi's life, from Samarkand in Uzbekistan, to Damascus, and eventually to Konya, Turkey, for the festivities around Rumi's "wedding night," the anniversary of his death when he was reunited with the Divine.

In the prologue, Gooch notes: "Rumi did have secrets — personal, poetic, and theological — that he was always both revealing and concealing. His was a life full of both mystery and meaning." Rumi's Secret is a remarkably detailed account of that life. It also paints a fascinating portrait of the confusing times in which he lived. We learn of the influence of his father, his family's travels from what is now Afghanistan to Turkey, and his career as a popular teacher and preacher in Konya. As he recounts incident after incident in his story, Gooch intersperses lines from Rumi's poetry reflecting the influence of his surroundings. For example, describing a caravanserai outside Konya, he notes that Rumi wrote about its decorative fountain:

"On all the roads they have built caravanserai with stone birds and other figures set around the edges of pools. Water flows from their mouths and spills into the pools. Any intelligent person knows that the water is not flowing from the beaks of the stone birds but from some other place."

The turning point in Rumi's life was his deep spiritual friendship with a wandering dervish, Shams of Tabriz. Rumi used images of the sun to describe him: "I already held a sweet image of you in my heart/When at that dawn, I first truly felt the sun." Shams introduced Rumi to music, sung poetry, and dance, including whirling. And when he disappeared, out of Rumi's broken heart sprung beautiful mystical poetry.

Gooch covers the sweep of Rumi's writing life, including how he came to embark on a six-volume spiritual masterpiece, the Masnavi. Key themes of his teachings are set in the context of his experiences. We appreciated all that. We appreciated Gooch's skillful weaving of quotes from Rumi's poetry and talks into this biography. And we loved his attention to little humanizing details — such as this story from Rumi's final days:

"During the onset of his illness, Rumi was not entirely bedridden and sometimes walked about the madrase in a frail manner. Unchanging was his certainty that he was going to die, and his preparing those close to him for the eventuality, as well as setting its tenor with good humor if not outright eagerness. When he sighed from pain while hobbling in the courtyard, his favorite cat mewed and howled. 'Do you know what this poor cat is saying?' Rumi asked. 'It says, "During these days you will be setting out towards heaven and returning to your original homeland. Poor me! What am I to do?" ' (When this cat died a week after Rumi, his daughter, Maleke, buried it near him.)" 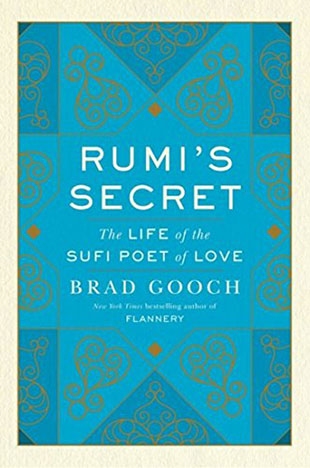