Bullets into Bells Poets and Citizens Respond to Gun Violence

Every year in the United States, more than 30,000 people die from gun violence, including suicides, accidents, and assaults. Between 1968 and 2015, more than 1.5 million people were killed by shootings — more Americans than in all the nation's wars combined. Toddlers mishandling guns kill more people than terrorists do. Depending on whom you talk to, it is estimated that there are one to two guns for every person in the United States.

These are some of the incredible statistics and findings contained in Colum McCann's introduction to this troubling paperback. The format is involving. Poems exploring the crisis of gun violence are followed by responses from gun control activists, political figures, survivors, and concerned individuals.

We are immensely impressed that this anthology manages not only to convey the pain, suffering, and loss of those shot but also helps us to empathize with those trying to handle the grief that follows. 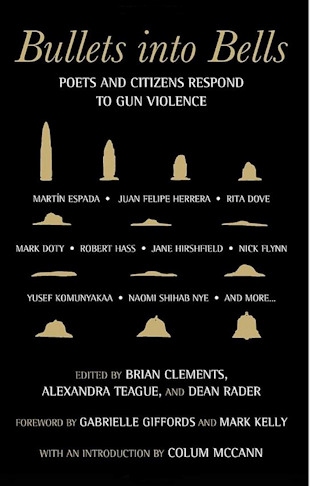