By Anna Clark
A shocking glimpse of the ethically troubling and wobbly state of democracy in America today.

In 2014, the tap water in Flint, Michigan, a city with approximately 99,000 residents, became contaminated after a greedy governor and corrupt officials decided to switch the source of its water from Lake Huron and the Detroit River to the less costly Flint River; this water ran through corroding lead pipes. Flint residents, many of them African-Americans, were shocked when the water that came out of their faucets, showerheads, and hydrants was brown.

There soon followed reports of illness, skin rashes, and hair loss among children who turned out to be the most vulnerable to the contaminated water. These innocent kids were being exposed to lead, a potent neurotoxin which the Environmental Agency had described as having no safe level.

Anna Clark, a sensitive and award-winning journalist from Detroit, does a vigorous job explaining the many complications, lies, legal challenges, and short-sighted decisions engendered by this catastrophic tragedy. Most notable of all is her compassion for the children of Flint who were treated like collateral damage by those in power who could have taken steps to put them out of harm's way.

It is very sad to read about the resulting lack of trust by residents in politicians and government officials. Could anyone blame them for feeling like their government considered them disposable? Reading this riveting and humane book in tandem with a viewing of Michael Moore's documentary Fahrenheit 11/19 will enable you to ponder afresh the wobbly and ethically troubling state of democracy in America. You will also wonder how many other Flints will happen in the future unless laws are changed and accountability is strengthened. 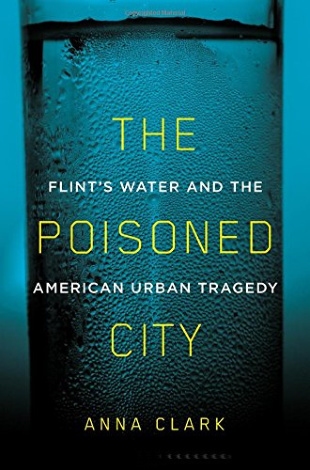