Can American Capitalism Survive? Why Greed Is Not Good, Opportunity Is Not Equal, and Fairness Won't Make Us Poor

By Steven Pearlstein
A presentation of the challenges to be faced and reforms needed to restore faith democracy, business, and equality.

Steven Pearlstein is a Pulitzer Prize-winning business and economics columnist for the Washington Post and the Robinson Professor of Public Affairs at George Mason University. In this hard-hitting and disturbing book, he presents a cogent overview of capitalism during the 1980s when the slogan "Greed is Good" was widely embraced and put into action in the business community. Growth was deemed more important than fairness, a view that is still prevalent today.

This brand of inequality capitalism enables the top 1% to cut or freeze worker's wages, to bust unions, and to ship assembly lines to regions where wages are low. One of the many social costs of increasing economic polarization is what is called the "Great Gatsby Curve," which shows that the poor remain poor while the rich stay on top; there is little economic mobility.

As a result of all the advantages given to the rich, other Americans have lost faith in the economic system and the ideals of justice, equality, and fairness as values to draw out the best of capitalism and democracy. Their confidence in free-market capitalism has not been helped by two serious recessions, scandals in the financial industry, and the need for government bailouts.

Pearlstein goes further to suggest that "another part of our disquiet reflects a nagging suspicion that our economic system has run off the moral rails, offending our sense of fairness, eroding our sense of community, poisoning our politics and rewarding values that easily degenerate into greed and indifference."

Refusing to leave readers stranded in the dark realization that the qualities that once made America great — optimism, equality, a sense of the common good — are no longer evident in our economic system, Pearlstein suggests some reforms and new policies: a universal basic-income policy paired with universal national service, new anti-trust legislation, tax savings for companies that share profits with workers, and equal educational opportunities. 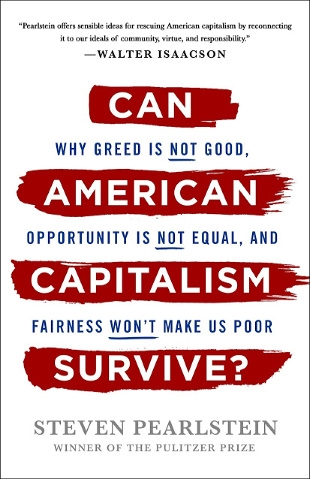