By Editors of Paraclete Press, Adam Bucko
A well-chosen and arranged collection of writings from key figures of the Carmelite path.

This unprecedented volume covers the essentials of Carmelite spirituality through excerpts from the classic writings of this Christian path. Included are passages from these Carmelites:

The editors of Paraclete Press have wisely organized the excerpts around key themes associated with Carmelite spirituality:

Mixed into the selections conveying the beliefs and ideals of this path are many very practical pieces. Here is advice on treating your melancholy gently, having a continual conversation with God, learning to taste spiritual food, how to pray, delighting in the ordinary, recognizing God's presence in you, removing attachments, and trusting one's own knowledge.

Adam Bucko in the book's foreword gives us a brief history of Carmelite spirituality, which traces its origins to the twelfth century at the time of the Crusades when a group of brothers retreated to Mt. Carmel to join a group of ascetics already living there. "What slowly emerged out of the dialectic of the heart that most likely took place between the new and the old hermits was a way of being with God" and a Rule of Life that asked them to live in constant awareness of God. The sixteenth century reforms of St. Teresa of Avila made this spirituality available to lay people as well as monastics.

Bucko, co-author of The New Monasticism and Occupy Spirituality, finds in this history inspiration for people in our own times, when "news of violence, poverty, ecological degradation, and religious fundamentalism fills our screens." His wishes for the book apply to any reader but especially to young generations:

"May this book and these saints help us to feel seen and understood. May their words help us to name our longings for a life in which our wounds and uncertainties are touched and transfigured by God. May their prayers and sharings give us a way forward. May the many young people who feel that the world they are inheriting is not a home and that the religious institutions of our day are incapable of speaking to their longings for a life that matters find some solace among these Carmel saints. And, just as in the early days, when the newcomers to Mt. Carmel and those of old gave birth to a new and yet ancient way, may these saints present here become conversation partners for this young generation, which is not necessarily interested in joining monasteries, but whose search for new ways of being with God, a new kind of monasticism if you will, is just as real as those who are. May their search be marked with the spirit of Carmel and may the way of the saints of Carmel become their way." 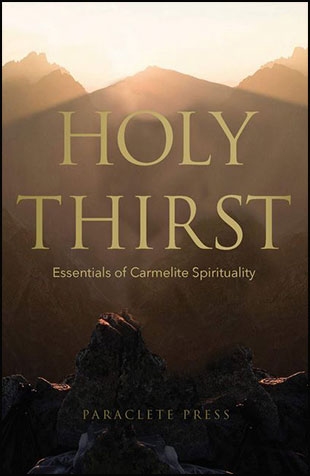