Election Meltdown Dirty Tricks, Distrust, and the Threat to Democracy

By Richard L. Hasen
The nation's leading election law expert on threats to the integrity of the 2020 Presidential election.

"We have to act now to take steps so that the next time there is a razor-thin election -- and there will be one, sooner or later — our civil society is strong enough to withstand foreign and domestic efforts to tear it apart." — Richard Hasen

Richard L. Hasen is Chancellor's Professor of Law and Political Science at the University of California, Irvine. He has been identified as the nation's leading election law expert. Given the anger, divisiveness, and dis-connection between the two political parties as the 2020 Presidential election draws near, he says, there are things that can go wrong.

Here are the four threats to American democracy:

Thanks to Hasan and other scholars for pointing out what we need to watch out for. But it's going to take more than research and observation to prevent an election meltdown. See the excerpt for three possible fixes. 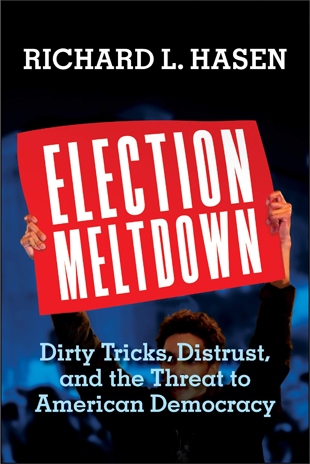