By Jessixa Bagley
A warthog's discoveries about inner beauty and friendship.

Even with a supportive family, childhood can be an insecure time. Daisy the Warthog gets reassured by her mother that she's named flowers that seem plain, "but when you look closer you see their beauty." The other animal children in their one-room schoolhouse, however, tease Daisy about looking more like a thistle than like her namesake flower. She puts her head down then ... and often.

What Jessixa Bagley — the author and illustrator of this and many distinctive children's books — does brilliantly is show Daisy's resourcefulness without downplaying her loneliness. Daisy creates her own fun by discovering "a whole magical world of things that seemed overlooked, just like her." She picks up chipped teacups, crumpled umbrellas, cracked mirrors, discarded keys, and more, arranging them artfully in her own secret hideout concealed by bushes.

No one knows she's there ... or do they? As she starts finding treasures tactfully stowed right by the entrance to her hideout, it begins to dawn on Daisy that someone understands and appreciates what she's doing.

Readers live through these experiences with Daisy thanks to Bagley's endearing watercolors, which capture the nuances of the young warthog's emotions, from dejection to curiosity to wonder. When she picks up a broken pocket watch left for her by her secret benefactor, we see her hold it tenderly up to her ear, her eyes closed as she imagines "the soft silvery sounds of the hands ticking away."

Children four to eight years old, and likely some who are younger or older, will draw strength from Daisy's use of imagination to build a more beautiful world for herself. When that beauty draws a friend to her, we know that it was Daisy herself who opened the door to that connection by letting her gentle, creative spirit take form in the world. 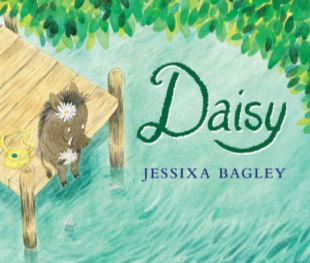