Mindfulness Walking with Jesus and Buddha

By Annabel Laity
A bringing together of Buddhist and Christian practice, for people who follow either tradition or double-belong

This little book is packed with teachings for a growing number of Christians in the West who find themselves involved in more than one religious tradition. The author is a Christian-born ordained disciple of Thich Nhat Hanh’s Zen lineage. She describes herself as having “double-belonging” in two religious practices.

It is essential, for those who double-belong, for those traditions to relate and complement each other in one’s life.

This is also a book for people who are actively practicing Buddhism in the West. Through mindfulness, lovingkindness meditation, or simply by enjoying the books and teachings of Thich Nhat Hanh, they can see how links to the teachings of Jesus — and Christian practice generally — may be naturally discovered and even cultivated.

Sister Annabel Laity writes: “The teachings of Jesus in the gospels are like doors that can be opened to find a daily practice of mindfulness.”

There are times when her observations show distinctions between Buddhism and Christianity, as, for instance, in the chapter “Mindfulness and Death”: “Death is going back to the source. Our bodies will go back to the planet Earth, which is always there to embrace us; our soul will go back to our loved ones.” This is Buddhist, but not Christian.

Most often, her reflections show similarities that deepen into being complementary. In the chapter “Mindfulness and Activism,” Laity writes, “There is a deep connection between spirituality and activism. In our Buddhist tradition, we often speak of mindfulness as holiness or the equivalent of the Holy Spirit.” Also, this: “Another important aspect of mindfulness is mindfulness of suffering. We … could understand Holy Spirit as mindfulness of the suffering and the deep aspiration to do something to alleviate it.”

Later, short chapters address mindfulness in support of various common situations in life, such as when we are ill, when we make mistakes, when a loved one dies, and when we need to relax. There are also reflections on Buddhist and Christian differences related to belief in God and to theistic practices generally in Christianity. All readers will find help in her discussion of God as a being, God as a word, and God as a practice. 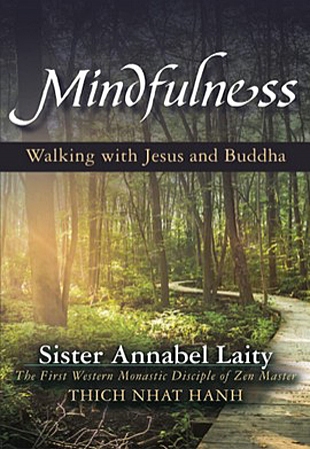