See No Stranger A Memoir and Manifesto of Revolutionary Love

By Valarie Kaur
A fresh approach to what love is and how it works for anyone who needs hope.

S&P's Contributing Editor Jon M. Sweeney had an “Off the Page" conversation with Valarie Kaur about “See No Stranger" on October 12th. Watch the video below.

There are reasons why books like this become best-sellers. We desperately need the compass that an author such as this provides. Valarie Kaur didn’t need to write a book. She wrote it, I suspect, because she is a person with a message that simply has to be shared.

Kaur was born in a Sikh farming community in Clovis, California in 1981. She was in college at Stanford when the 9/11 attacks took place. A family friend was one of the first people of color to be murdered in the bitter days of bigotry that came just afterwards. Kaur quickly became an activist, fighting for the rights of the Sikh community. Her senior honors thesis at Stanford was on the subject of hate crimes after 9/11.

Then she turned the thesis into a film, creating Divided We Fall: Americans in the Aftermath, which won awards for Best Documentary at the Los Angeles Indian Film Festival and the Toronto ReelWorld Film Festival in 2007. She turned to other subjects as well, oftentimes with her new husband, filmmaker Sharat Raju. They created documentaries on New York City’s “Stop and Frisk” policy, on immigration raids and immigration rights, and on the expanding practice of solitary confinement in U.S. prisons.

Along the way she earned degrees from Harvard Divinity School and Yale Law School, married outside her faith, got arrested, become an eloquent religious leader, spoke at The White House, and joined the California Bar, where she practices civil-rights law.

Much of this is detailed in this memoir, as Kaur learns ten ways of practicing the revolutionary love that she says is possible and that can change the divisions we currently experience in our world at every level. Wonder. Grieve. Fight. Rage (see the excerpt accompanying this review). Listen. Reimagine. Breathe. Push. Transition.

Love, she says, is not a rush of feeling but a labor of actions repeated over and over to care for others and ourselves, to know the stranger, and to understand our enemies as still somehow a part of us. As most readers will know, this message, this articulation, resonates with the best part of every major religious tradition. As a result, people across the traditions — including Rev. William J. Barber II, Rabbi Jill Jacobs, Parker J. Palmer, Eboo Patel, Sister Simone Campbell, Sharon Salzberg, and many others — have lined up behind her with praise and support.

Her primary message, she states very early on in the book, and it was also the message of the TED Talk which inspired See No Stranger:

“Love is a form of sweet labor: fierce, bloody, imperfect, and lifegiving — a choice we make over and over again. Love as labor can be taught, modeled, and practiced. This labor engages all our emotions. Joy is the gift of love. Grief is the price of love. Anger protects that which is loved. And when we think we have reached our limit, wonder is the act that returns us to love.”

“ ‘Revolutionary love’ is the choice to labor for others, for our opponents, and for ourselves in order to transform the world around us. It begins with wonder: You are a part of me I do not yet know. It is not a formal code or prescription but an orientation to life that is personal and political, sustained by joy. Loving only ourselves is escapism; loving only our opponents is self-loathing; loving only others is ineffective. All three practices together make love revolutionary, and revolutionary love can only be practiced in community.” 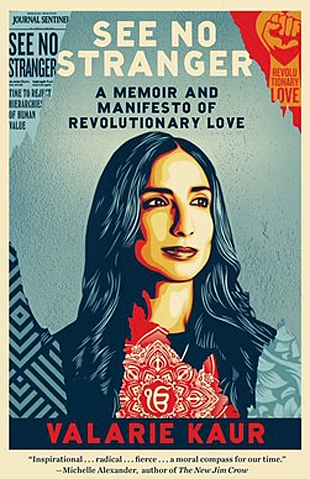