By Jon M. Sweeney
A practice-oriented exploration of living with nothing to lose, based on the teachings of St. Francis.

"The nature of ordinary miracles," writes award-winning author and publisher Jon Sweeney in the preface to this book, "is that they can be repeated." Just like St. Francis' lifestyle made Jesus' teachings relevant in the 12th and 13th centuries, Sweeney hopes that Feed the Wolf will foster a continued renaissance of interest in the path of this earthy and rugged saint, a path that he believes "remains the surest way for a person today to turn away from fear and find grace in modern life."

The book's title comes from the story of a wolf who stalked farm animals and attacked citizens of the town of Gubbio in Umbria, a region in central Italy. The town's inhabitants asked Francis to help get rid of the wolf, and what did he do? Leaving the Gubbians dumbfounded, he went to meet and communicate with the wolf. In this way, he discovered that the wolf was hungry. Then he brokered a deal that the townspeople would feed the wolf daily in exchange for him never attacking them or their animals again.

In each chapter of the book, Sweeney starts with this tale to illustrate an essential truth that's meaningful to us, too. Using wolves as a metaphor for what threatens us, he writes, "There's a reason wolves get hungry, remain hungry, and become threatening. Why is it we often don't believe it's our job to meet them, understand them, feed them?" He goes further by weaving the tale together with teachings from other traditions, from fairy tales to nature writers to a Judaic call to care for strangers.

This kind of gentle, understanding, multifaith wisdom permeates chapters on living simply, refusing power, spending time in the woods, using words carefully, beginning to dance, making a big table and inviting the neighbors, and more. The book abounds with stories — and as those who know Sweeney's series of children's books about the Pope's cat realize, he's a captivating storyteller. One of our favorites in this book involves Frederic and Mary Ann Brussat's cats and their surprising response to a whole new world of nature that opened up to them. You can read about it in the excerpt accompanying this review.

What makes this book most endearing and accessible, though, is the understanding that Francis kept leaning into life even when he experienced failure: "a forever split with a parent, a friend's betrayal, physical suffering, moments of humiliation, and death." That he could nevertheless live with a flourish encourages us to do so, too, even when we feel most vulnerable.

Each chapter in the book closes with a paragraph or two that brings the heart of the lesson home. For instance, the closing of chapter 6, "Touch What's Frightening," points out our need to recover Francis' gentleness and humility in relation to all living beings; "the earth's resources are to be shared among its inhabitants and sustained by careful attention." And chapter 11, "Find Your Courage," concludes with an invitation to be daring and resolute which, Sweeney concedes, isn't easy, but is essential if we hope to have an impact in the world.

Jon Sweeney's 30 books include The Complete Francis of Assisi. He is considered the authoritative voice on the life and spirituality of St. Francis and speaks regularly at literary and spirituality conferences.

At ten pages or less each, the 17 chapters of Feed the Wolf serve as inspiring practices for a series of days or weeks. The fundamentally reassuring nature of this book makes it an excellent gift for a loved one. It is the kind of book you're likely to put on the top of your bedside reading pile to visit again and again. 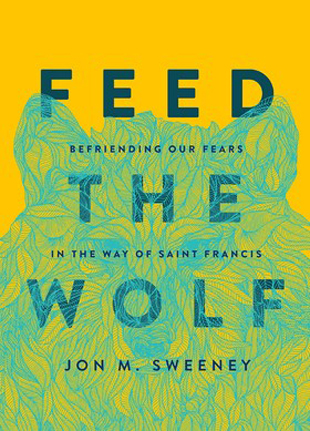