The Hermits of Big Sur

By Paula Huston, Pico Iyer (Foreword)
A reminder that there are still holy places where people find their way.

This work of modern history, engagingly written, tells the story of a place that in its purpose and use reminds us more of medieval examples. Its description of monastic community in the Santa Lucia Mountains of California’s rugged central coast reminds us that such sanctuaries can still be found. Amid much detail, Paula Huston weaves an account that keeps the attention of the reader interested in monastic spirituality, prayer, contemplative practices, famous twentieth century spiritual teachers, Beat writers and transcendental meditation, and changes in the Catholic Church in relationships with other faiths.

This special place — The New Camaldoli Hermitage in Big Sur — was founded in 1958 by two monks sent from the “motherhouse” in Italy. The story of how this came to happen involves the popular twentieth century writer and monk, Thomas Merton, who used to write about the spiritual riches of Camaldolese religious life as compared with his own Trappist religious life. Camaldolese monks live as hermits, spending most of their time in “cells” that are usually separate small huts. They have more time for contemplative practices and prayer than do monks who live “in community,” side-by-side. Merton even wrote letters to the Camaldolese in Italy urging them to start a foundation in the United States.

Peppered throughout Huston's narrative are short character studies, new actors in the drama, from the history of this remarkable place overlooking the Pacific. For example, we meet Thomas Matus in chapter 15 — “formed as an adolescent in the milieu of 'Hollywood Hinduism' and introduced to meditation by Yogananda…. Once at Camaldoli, he was driven straight up the mountain to the eremo [“hermitage” in Italian]. ‘The impression was overwhelming,’ he recalls…. In one of those mysterious connections between monks that transcend time and space, it was Thomas Merton’s The Silent Life that had introduced Matus to this holy place.”

Author Paula Huston has been an oblate (affiliated, but not resident) of the New Camaldoli community for many years, and this is part of her motivation to tell their story. Journalist and author Pico Iyer, likewise, in his foreword, credits this community of monks: “For this Hindu-born traveler long based in Buddhist Japan, the Benedictine hermits of Big Sur have been my guiding teachers, inspirations, and role models.”

Other important figures include Father Robert Hale, whose six decades of journal entries Huston had access to, in the writing; Father Bede Griffiths, a Camaldolese monk who lived most of his life in India and wrote many important spiritual books; Father Bruno Barnhart, prior (monk in charge) of New Camaldoli for decades, who also penned important spiritual books; and Father Cyprian Consiglio, the religious community’s current prior, again an author who continues to make accessible the spiritual practices of reverence, attention, and unity that are central to the Camaldolese worldview.

The New Camaldoli is named for its medieval forebear in Italy, commonly referred to as “Old Camaldoli.” Again, Huston loves the details — for instance, writing about how the new learns from the old, explaining, “most of the hermitage’s nine hundred acres were not farmland, but mixed forest. Old Camaldoli was famous for its well-tended, healthy forests, and the community was determined to adopt that proud heritage in Big Sur. One day, 7,500 Bishop pine starts were brought from Davis [California] and the monks began planting them the next morning.”

Even the chronology is rich, interweaving key facts that come together later in the story, almost as if to show the karmic power at work. The first chronological entry is for the year 952, and the last is for 2021, when the two-mile road to New Camaldoli, Highway 1, collapsed due to heavy rain, cutting off the community from the world and the many retreatants who visit every year. We enjoyed entrees such as this one, that point to threads which later come together: “1931 — Bruno Barnhart is born in Long Island, NY; investor Edward Moore buys 10,000 acres of Big Sur land for his Circle M Ranch.”

The pages are also full of occasional black-and-white photographs, captioning key players in the story as well as the beauty of the place as a spiritual retreat. 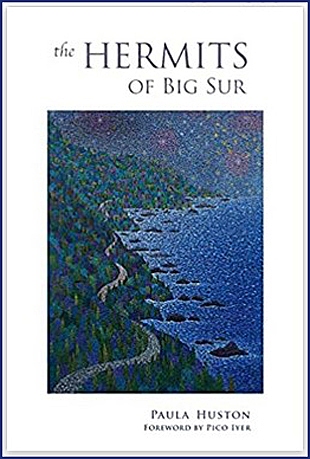