Yoke My Yoga of Self-Acceptance

By Jessamyn Stanley
Yoga of the everyday for the rest of us.

This book has an important and powerful message, returning to the original purposes of yoga and separating yoga the discipline and practice from what have become its all-too-common identifications with white, middle-and-upper-class ways of living.

Jessamyn Stanley is, by her own description, “a fat, Black, queer yoga teacher in a predominantly thin, White, and very straight yoga industry.”

She peppers her text with important brief quotations from sutras of Sri Swami Satchidananda, an Indian guru and teacher who taught for many years in Virginia and died in India in 2002. For example, “Practice becomes firmly grounded when well attended to for a long time, without break and in all earnestness.” And, “A happy or unhappy life is your own creation … You are your own best friend as well as your worst enemy.”

Stanley shows how a firmly grounded, well attended practice of yoga does not always correspond to the model of physical fitness that much of yoga in the West has become. The painting of the author on the cover of this book and the photo of the author on the back flap are designed to make it obvious that yoga is not only, or even primarily, about being trim.

Yoga is about what the title of this book says. As Stanley summarizes it: “Yoga means to yoke, as in, to join together the light and dark of life, the good and the bad. Yoke, as in, ‘let’s yoke these cattle together.’ To yoke is to marry breath, thought, and movement, to connect the body, mind, and spirit. To yoke is to explore the meaning of balance.”

This is what Stanley does over a dozen chapters on traditional yoga topics such as “Poses,” “Rituals,” “Meditation,” and “Breathing.” She also applies the discipline to the “full-time job of loving yourself” and related topics that interweave her own memoir with yoga advice.

She tells of giving herself permission to move into a practice of her own, listening to the voice inside of her as she does so. This new practice takes on a holistic dimension that she hadn’t previous known in yoga. She writes: “My yoga may have started out being about practicing poses, but dealing with my mental and emotional baggage is the real yoga.”

She is also frank about her experiences — for example, “Sometimes, the only way I can deal with my anxiety is by smoking weed and listening to music” — leaving the reader feeling not only accepted but able to be honest with themselves, too, in the process of taking on a yoga discipline.

try a practice on play 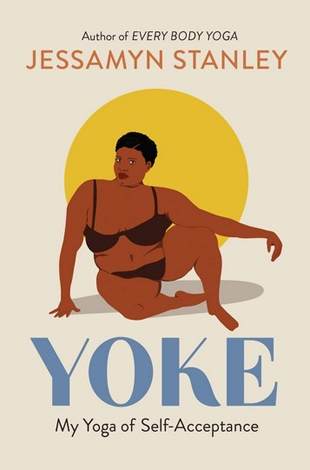