Do I Stay Christian? A Guide for the Doubters, the Disappointed, and the Disillusioned

By Brian D. McLaren
Answers from one of our most eloquent Christian teachers for those asking: Why bother?

S&P's Contributing Editor Jon M. Sweeney had an “Off the Page" conversation with author Brian McLaren about “Do I Stay Christian?" on May 24, 2022. Watch the video below.

If you’re a Christian who is unaware of any problems in your church, this book probably isn’t for you. But if you’re a former Christian, someone who has walked away from your faith, for any number of reasons, you are precisely the reader Brian McLaren hopes to reach.

Wait, he wants to say. Hold on. There are reasons to remain where you are. Or, come back.

Part Two then offers ten chapters of reasons for Christians to say yes instead of no to their faith. Some of the reasons are personal and interpersonal, such as “Because Leaving Hurts Allies (and Helps Their Opponents),” and others are perhaps more convincing — for instance, “Because of Our Legendary Founder” (ch. 15) and “Because Christianity is Changing” (ch. 18). McLaren is himself no small part of the change he speaks about, here. Other figures McLaren raises as positive lights on the way are the late Black theologian Howard Thurman, the great contemporary spiritual writer Barbara Brown Taylor, and the current head of the Roman Catholic Church, Pope Francis.

Regarding Pope Francis, McLaren, says: “Of course, he isn’t saying and doing everything some of us wish he would. He knows he has to bring his people along at a pace that won’t blow up the whole Catholic Church, and I can only imagine the threats and resistance he faces behind the scenes. But when you read his letter to the world, Laudato si, don’t you feel how incredibly blessed we are to have him at a time of ecological and economic collapse? And when you read its sequel, Fratelli tutti, don’t you see it as a call to exactly the kind of solidarity we dreamed of in the previous chapter? In light of these remarkable breakthroughs, how could we give up now?”

In fact, this is a big part of McLaren’s argument to Christians “on the fence” about whether to leave or stay: “how could we give up now?” So much has been accomplished; there is so much yet to do; and there is so much for those who are Christian to contribute to the becoming-better-human-beings enterprise.

At times, he takes a step back from Christianity and addresses the subject of why bother with organized religion in any form. On this subject, we found his chapter, “Start with the Heart” (ch. 22) most compelling. After chronicling our powerful human desires — “for wealth, for pleasure, for power, fame, fun, revenge, play, safety, creativity, belonging, and love” — McLaren suggests: “If religion has a positive role in our future, it will surely involve specializing in desire formation. In fact, for better or worse, religion is desire formation.” Each religion does this somewhat differently, and all to the good.

At its best, each religion has its way of pointing people toward “a more mature humanity” that “will desire the good of all people, beginning with the poor and most vulnerable.” One reason McLaren gives that he remains Christian, despite all the lousiness of his tradition, is that Christianity remains, at its best, an excellent path for people ready to learn to understand their hearts on the way to becoming more fully human, “passionately eager to embody a way of being human that is pro-justice, pro-kindness, and pro-humility.”

Any spiritual path that guides and teaches you to love yourself, love other people, love creation, and love the transcendent (he knows that many people won’t and don’t call this “God”) is good, in order to train our “all-inclusive desire for universal well-being,” says McLaren. Then he adds, “I [still] see Christianity as my heart’s path into this mysterious and sacred web.” 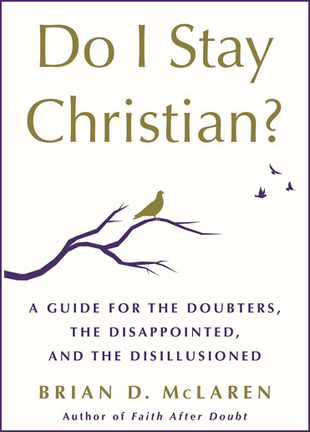