Chasing Rumi A Fable about Finding the Heart's True Desire

By Roger Housden
A love story that reaches into the depths of the heart while traversing the bounties of the imagination.

In 1948, eighteen-year-old Georgiou visits the Museo San Marco in his hometown of Florence. One fresco by Fran Angelico depicting the Sermon on the Mount captures his gaze. There is something about the the faces of the disciples: "They were filled with a rapture he had never known existed; a tangible sweetness of love, which was both of this world and not of it at the same time. Their expression seemed to show a love for Jesus, the man, and also for something else that could never be put into words." He is awe-struck: “When he finally got to his feet he knew, though not with his ordinary mind, that he had been filled with the love that makes the world.”

Ten years later, Georgiou is an icon painter and restorer of old paintings in Florence. He has learned the work from his Greek father. Although this serious young man is still entranced by the city's great works of art, a restlessness has come over him. Then, Andros, an older friend, gives him a book of poetry by Rumi, the thirteenth century poet who founded the mystical order of Muslims known as the Whirling Dervishes. Georgiou is unprepared for the feelings of elation which sweep over him: "Rumi's words reached down into him and touched a tenderness beyond all his questioning, beyond all his ardor and desire for life. Tears began to well in his eyes. This poet, this stranger, knew him by heart."

The prompting of Georgiou's heart convinces him that he must make a pilgrimage to Konya, where Rumi is buried and where he wrote his most inspired poetry. Andros advises him to always tell the truth and to pay attention to his dreams on this sacred journey. He gives him letters of introduction to a priest on the Holy Mount of Athos and to a Sufi mystic in Istanbul. On the way, Georgiou stops at the Megalo Meteora, the Monastery of Transfiguration, the largest and most ancient monastery in all of Greece. He describes his quest to a priest: "I know it when I feel it. It is a love in which nothing is left out."

His next stop is at the shrine of Delphi. Georgiou has a dream in which Our Lady with a dark face appears; it fills him with both joy and sorrow. He decides to paint a icon of this Dark Mother. The young artist stays on in Delphi for many weeks after the local villagers ask him to restore an icon that is very precious to them. The priest, who has also had a vision of the Dark Mother, describes her: “She is wild and dark because She is Life itself. Like life, She summons our demons as well as our angels.”

Georgiou travels on to the Holy Mountain of Athos, where he is invited to stay and share a studio with Father Dimitri, Andros’ brother who is also an icon painter. Georgiou works on his icon of the Dark Mother and learns more about the kind of devotion practiced by the monks in this place isolated from the rest of the world. Dimitri tells him that it is thought that the Sufis first taught their forefathers on Mount Athos the prayer of the heart, only the words were changed. During a brief encounter with Father Sofroniou, a hermit, Georgiou is encouraged not to settle for easy answers and to live the questions on his sacred journey to Konya. When his icon is finished, he knows it is time to continue.

In Edirne, Turkey, a beggar takes the earnest pilgrim to a sanatorium where Mevlevi dervishes of the order founded by Rumi used music to soothe the troubled souls of the sick in mind. Georgiou learns that their devotion was an important element in the healing process. In Istanbul, Georgio connects with Hassan Shushud, a master craftsman of the ney, the flute used by Sufi musicians. He turns out to be a Mevlevi sheikh who explains that for this order “music and dance are the royal road to uinon with the Beloved.” Georgiou discovers this for himself when he goes to a special hall and sees the whirling dervishes in the sema ceremony. He falls into a swoon when he realizes that they have the same expression on their faces as the disciples in Fra Angelica's fresco in the Museo San Marco. He is amazed by the link between the two experiences in his life.

Georgiou takes a job at the shop of Mohammad, a Sufi, selling songbirds in the streets of Istanbul to those who believe that birds, especially canaries, bring the angels near. He begins to practice the dervish dance. But he learns the most from just being in the presence of Hassan, a man of great spiritual power or baraka. In turn, he is able to give the sheikh a precious and long awaited gift.

Finally arriving in Konya, Georgiou visits the tomb of Jelaluddin Rumi: "For an hour or more he remained there, bereft of something, though he didn't know what; humbled, yet grateful, so grateful, for this deep cleft in his heart that joined him somehow to every other human being, to every suffering soul. How fortunate he was, he felt, to know this deep sorrow that spread out from his heart and washed over him, a softening wave." In Konya, Georgiou's sense of the mystical is greatly deepened with new and startling experiences that transform his life and open him to the possibilities of the love that has been the animating force behind his quest.

Roger Housden served up a delicious banquet of spiritual poetry in Ten Poems to Change Your Life. Before that, he charted the different dimensions of the spiritual renaissance in Sacred America: The Emerging Spirit of the People and Sacred Journeys in a Modern World. All three were very good preparation for this enchanting and lyrically written fable. Several years ago, we were fortunate enough to attend a gathering at Sufi Books in New York City where Roger Housden recited poems from Rumi. We were stopped in our tracks by the beauty, grace, and reverence in his presentation. Most of all, he drew all those present into a circle of love where we all could experience afresh the abundant gifts in Rumi’s mystical poems.

Intimations of that same beauty, grace, and reverence are to be found in Chasing Rumi. This fable about finding the heart's true desire is elegantly written with not a spare word; it moves fluidly from start to finish sending off countless sparks in our consciousness. Housden makes the most of his past experiences as a leader of tours to sacred sites; we feel we are in the hands of a sensitive cartographer of the “thin places” that Celtic mystics talk about. The author also gives a subtle and sensitive delineation of the mystical journey of the soul. Many readers will be intrigued by the fascinating links he makes between Sufism, Eastern Orthodoxy and the Divine Mother.

Chasing Rumi is one of the best reads of 2002. This love story reaches into the depths of the heart while traversing the bounties of the imagination. 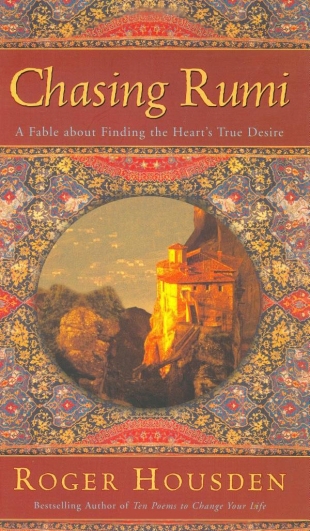