By Rupert Sheldrake
A strong explanation of the reality of telepathy and other ways our minds go beyond our bodies.

In his best-selling Dogs That Know When Their Owners Are Coming Home, scientist and writer Rupert Sheldrake demonstrated that animals (dogs, cats, horses, and parrots) can sense things at a distance. Now, armed with more than 4,000 case histories, 2,000 questionnaires, 1,500 telephone interviews, and a decade of experiments exploring unexplained perceptiveness in human beings, he presents his case that telepathy, the sense of being stared at, and premonition are not paranormal but normal, a part of our biological makeup.

Although these powers are less developed in human beings, we share them with many other species. Sheldrake is convinced that it is time to investigate and make better use of these partly lost and terribly neglected elements of our evolutionary heritage. Reading this challenging volume, we get the distinct sense that the author is taking us on a scientific adventure that has deep spiritual ramifications. This work calls us to acknowledge the connections that tie us to the environment and all living beings.

Many people believe in the reality of psychic phenomena and have even experienced thought transference. Think about the times your significant other has finished a sentence for you. Or when you have picked up the phone and heard the voice of the person you just were thinking about? Many mothers are telepathic with their babies, and large numbers of people have had thoughts about a person close to them in danger or dying. Telepathy is a form of biological communication that occurs in countless situations and settings.

Sheldrake is convinced that telepathy, the sense of being stared at, and premonitions constitute a seventh sense beyond the five normal senses and the so-called sixth sense that extends beyond the body. One of the most interesting chapters in the book is on the evil eye, whereby people have the ability to influence others adversely by their looks. In countries such as Greece, amulets and charms are still used to cast off the evil eye and gain relief from its spell. The Orthodox Church has a number of officially approved prayers to drive away ill effects from the evil eye.

All of this suggests new arenas for research and exploration. For now, Sheldrake has given us a solid body of evidence that our minds extend beyond our brains and "our intentions stretch out into the world around us, and also extend into the future." We eagerly await the next installment in this scientist's fascinating studies. 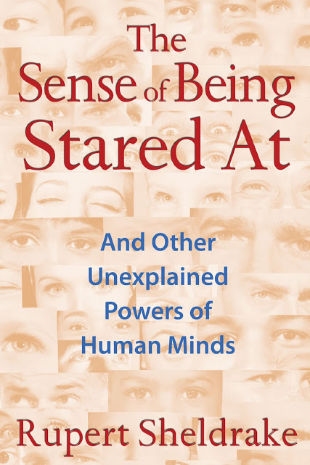