The Fifth Book of Peace

By Maxine Hong Kingston
A blend of fiction and nonfiction exploring the meaning and value of pacifying the world through creative writing, play, dreams, questing, and nonviolent protest.

In 1991, Maxine Hong Kingston's Oakland home was destroyed by a forest fire. Inside was the only copy of a manuscript of a novel called The Fourth Book of Peace. This Senior Lecturer for Creative Writing at the University of California, Berkeley, and author of The Woman Warrior, China Men, Tripmaster Monkey, and Hawai'a One Summer was overtaken by a great sadness. The opening section of this imaginative work is titled "Fire," and it recounts Kingston's grief. She had written 156 pages about characters who use peace tactics. "It had to be fiction, because Peace is supposed, imagined, divined, dreamed. Peace's language, its sounds and rhythms, when read aloud, when read silently, should pacify breath and tongue, make ears and brain be tranquil."

The author laments the loss of this work and all the other treasured possessions, including the family's jade jewelry, in the fire. A Quaker poet friend then tells her something that she would rather not hear: "If a woman is going to write a Book of Peace, it's given to her to know devastation." The prophetic path is never one of comfort and convenience. The warring ways of humankind do not fade away without a dazzling display of determination and creativity by peacemakers.

In the second section of the book titled "Paper," Kingston talks about her quest to find the three legendary Books of Peace that have been lost over the long stretch of time. She also ponders the many meanings of storytelling as a way of reaching out to others. The third section "Water," is a re-creation of the burned book. It is the fictional account of Wittman Ah Sing, a fifth generation Chinese-American playwright who flees Berkeley to Hawaii as a draft resister during the Vietnam War. He and his wife Tana become involved in setting up a sanctuary for GIs.

The final and most impressive section of the book is titled "Earth." It is Kingston's account of a meditation and writing workshop she organized with the Community for Mindful Living in 1993 for veterans and their families. To create a new literature of peace, she invites veterans of the Vietnam, Korean, and Gulf wars. By getting involved in this project, Kingston fulfills her mother's dream for her "to educate the world." Of course, the writing of these survivors reveals the ugly side of war, the lingering aftershocks of killing, and the truth that no one ever wins. It is startling to learn that 150,000 Vietnam veterans have died by their own hand since the war ended. Reading the accounts of these wounded warriors is very moving. A quotation by Cochise, Chiricahua Apache, says it all: "You must speak straight, so your words may go like sunlight to our hearts."

In the epilogue, Kingston talks about her experience of being arrested in front of the White House for protesting the war in Iraq. She continues to teach and conduct workshops with veterans and challenges us to do what we can:

"The images of peace are ephemeral, The language of peace is subtle. The reasons for peace, the definitions of peace, the very idea of peace have to be invented, and invented again.

"Children, everybody, here's what to do during war: In a time of destruction, create something. A poem. A parade. A community. A school. A vow. A moral principle. One peaceful moment." 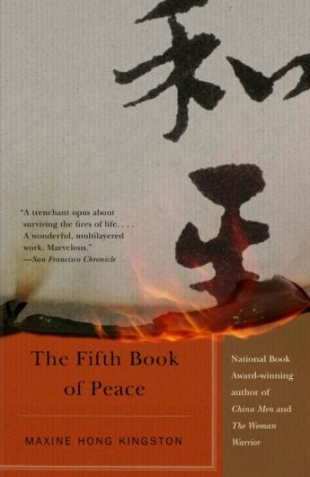