Seven Years in Tibet Screenplay and Story Behind the Film

By Jean-Jacques Annaud, et al.
A tie-in with the movie.

This is a tie-in volume written by Jean-Jacques Annaud, Becky Johnston, and Laurence B. Chollet for the movie of the same name. Director Annaud (Quest for Fire, The Name of the Rose, The Bear) zeroes in on the main theme of the drama-"the metamorphosis of a young, egocentric, opportunistic Austrian into an endearing human being." In his preparation for the film, he took hundreds of photographs of Tibet which are included here. The forbidden city of Lhasa was recreated in Argentina, and the snowy wilderness of the Canadian Rockies was a stand-in for the Himalayas.

The screenplay by Becky Johnston, reprinted here, gives the reader and filmgoer a chance to savor the scenes where Harrer, in his construction of a movie theater for the Dalai Lama, finds a way to save all the worms in the ground that is being torn up. There is also the wonderful speech by Tibet's youthful leader to the Chinese emissaries. Seven Years in Tibet is a crosscultural triumph that builds even more bridges between the East and the West. 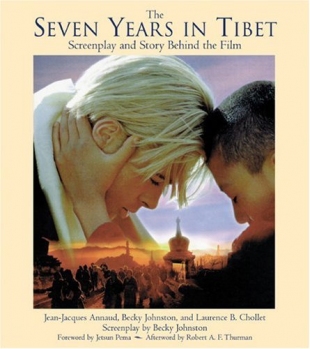