By Robert Thurman
A lively and substantive consideration of this emotional addiction mainly from a Buddhist perspective.

In the Christian and Islamic West, anger is viewed as a deadly sin, and people are admonished to try and quell this volatile emotion. Of course, at the same time, God is often envisioned as a consuming fire and even Jesus, the peacemaker, explodes in righteous indignation at the sellers in the temple. Now secularists who do not believe in sin have come up with their own "anger management" programs. In Buddhism, anger is seen as one of the three poisons that lie behind so much human suffering. And branching off the root of anger are aggression, vindictiveness, malice and violence. In this edifying volume, Robert Thurman explicates the Buddhist project of "resigning from anger." In substantive chapters on the yoga of anger transcendence, tolerant patience, insight patience, and forgiving patience, he spells out ways in which individuals have dealt with this emotional addiction.

The Buddhist teacher Shantideva has written:

Whatever my virtuous deeds may be
Venerating Buddha, generosity and so on,
Amassed over a thousand aeons —
All are destroyed in a moment of anger.

Thurman writes eloquently about the Buddhist cultivation of patience as a means of conquering anger. He advocates empathizing with other addicted and suffering beings, and practicing active forgiveness rather than giving in to the fires of hatred and revenge. The Dali Lama has taken this practice to the most powerful and profound level with his love for Mao and other Chinese who destroyed his country and sent him into exile. Under this approach, our enemies provide us with the opportunity to practice endurance, forgiveness, and compassion.

Thurman concludes: "Once anger is conquered by the yogas of tolerance, insight, and forgiveness patience, its furious fire is still there to be used creatively by the heroic angel of wisdom. Anger now becomes creativity transcendence; anger becomes joyous heroic energy." The author of Infinite Life: Seven Virtues for Living Well has a masterful style for dealing with such moral matters, and it is always a treat to see what he is going to say next. Certainly in these times of terrorism, military aggression, civic hostility, and personal temper tantrums, this sturdy little volume in Oxford University Press's series "The Seven Deadly Sins" is a welcome addition that overflows with wisdom. 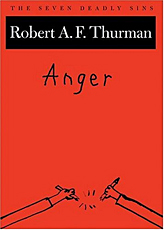