Peace Is the Way Bringing War and Violence to an End

By Deepak Chopra
Debunks the myths that make war so addictive and suggests ways to practice peace everyday.

Mahatma Gandhi said, "There is no way to peace. Peace is the way." Yet we live in world more seized by war and violence and terror than ever before in human history. At the outset of 2003, it was estimated that 30 military conflicts were being fought around the world. More than 21.3 million soldiers are serving in armies around the world. In this visionary work, bestselling author Deepak Chopra calls for us to give peace a chance, as John Lennon did years ago. He claims that war has "grown a groove in our minds, so that when we become very afraid or very angry, the response of war comes naturally. . . . We reach for war the way a chain-smoker reaches for a cigarette, muttering all the while that we have to quit." Addiction to war has become a nasty habit in America over the past four decades: Iraq, Afghanistan, Kuwait, Somalia, Lebanon, Panama, Grenada, Vietnam, and Cambodia, not to mention more covert military operations in Laos, Nicaragua, and Columbia.

What is it about war that is so addictive? Chopra notes the myths that make it so: war provides an outlet for national vengeance, it satisfies the demands of fear, it brings power to the victor, it provides security to the homeland, and it opens an avenue for getting what you want by force. Mahatma Gandhi, Nelson Mandela, and Mother Teresa have shown us an alternative — "that the way of peace can end suffering and oppression, not by warring against an enemy but by bearing witness to wrongs, and by allowing sympathy and common humanity to do their patient work."

The way of peace is the path of love. Chopra points out that the Vedic texts, there are three things that contribute to taking this path:

Seva: Your actions harm no one and benefit everyone.
Simran: You remember your true nature and your purpose for being here.
Satsang: You belong in the community of peace and wisdom.

The author condemns the "Us Versus Them" mythology that has animated American wars in recent years. He exposes some of the illusions that undergird contemporary nationalism, such as: nationalism helps to free people, when it really is the same as militarism; other nations are inferior, misguided, and wrong in their ways; God favors one country and supports its destiny; national boundaries make us secure; and your country defines who you are. A totally different perspective comes with a global view animated by spirituality where the nature of God is peaceful, killing is a sin, human life is sacred, God abhors violence against his creation, war betrays our highest nature, and war violates the covenant that makes all God's children equal.

We can all practice peace every day by changing our habits and mindsets. Chopra salutes conflict resolution, voting, and finding concrete ethical ways of supporting nonviolence. He also lays out a seven-day program for practicing peace (see the spiritual practice below). In a time when so many people are in a funk about the future and the best path to peace, this book offers a clarion call to return to the fray and to each do our bit to bring war to an end. 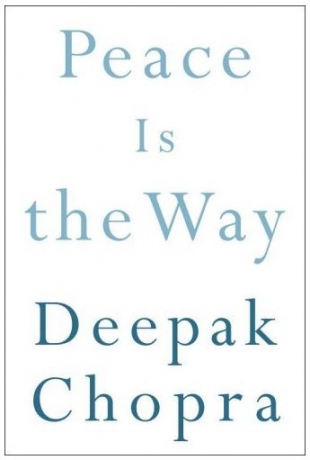