The Light and Fire of the Baal Shem Tov

By Yitzhak Buxbaum
A treasure trove of profoundly mystical stories and teachings by the founder of Hasidism.

Yitzhak Buxbaum is a maggid, a traditional Jewish inspirational speaker and storyteller. He is the author of ten books including Jewish Spiritual Practices and Jewish Tales of Mystic Joy. This extraordinary work brings together stories and teachings from Rabbi Israel Baal Shem Tov (1700-1760), the mystical founder of Hasidism.

Those familiar with quotations by this sage will rejoice in the chance to discover more from his deep well of insights into the presence of God in the warp and the woof of our daily lives. Those who know nothing about this storyteller and controversial Jewish leader will savor the deluge of material presented on these pages.

Buxbaum is our guide, providing plenty of fresh perspectives on the Baal Shem Tov's devotional practices. Again and again, the Besht (as he was often called) surprises us with the depth of his perception of the grace and the glory of God.

Buxbaum includes the following tale which illustrates the power of stories to transform our lives: "The Rebbe of Helish was once asked to tell a tale. He said, 'A person should tell a tale in a way that the telling itself saves.' My grandfather, who was a disciple of Baal Shem Tov, was lame. When he was asked to tell a story of his master, he began to tell them how the holy Baal Shem Tov leaped and danced when he prayed, and as he recounted what he had seen, he stood up. The story so aroused his fervor, that he began to show them by his own leaping and dancing how his master did it. That moment, he was cured of his lameness and became a healthy man." If you come to these stories with an open mind and a warm heart, they might just bring changes into your life which are healing or helpful.

The Baal Shem Tov was a mystic who believed "There is nothing but God!" It is a phrase that he repeated aloud many times. How did this work in his daily life? There are many examples given in the book, here are just a few. Whenever the Baal Shem Tov met another Jew, he asked himself, "Why did God send this person to me? How can I help him? — materially or spiritually." Whenever he went out into the natural world, the Baal Shem Tov was delighted by the beauty around him and took it as a signal to praise the Creator for this wondrous earth. Another dimension of his panentheism (seeing everything in God and God in everything) was his ability to see his speech and the words of others as coming form a divine source, no matter the other person's intention.

In a piece titled "The Imprint of the Maker in What Is Made," Buxbaum sets it up with the following words: "When the Baal Shem Tov saw a crafted object, like the kabbalistic picture of the candelabra, he knew by his holy spirit the craftsman's thoughts when he made it. After this incident in Whitefield, he explained the principle behind his ability to some disciples who were with him. 'When a craftsman shapes crude matter, he leaves the imprint of his intelligence, which is his life-force, in the object he makes. The spirit of the maker is impressed and imprinted in the object made. If you have the eyes to see it, you can recognize the spirit of the maker and his behavior in the object. The same principle,' said the Besht, 'applies to this world, which is the work of God's hands.' "

Throughout the book, we see how the Baal Shem Tov infuriated pious Hasidim who were serious scholars. He had a special place in his heart for simple Jews of low standing who tried to do God's will in their daily lives. The Besht saw these folk as spiritual teachers and often told his disciples to pay close attention to the sincerity of their devotional practices.

Another theme long associated with him is his ardor for joy as an essential virtue for those on the spiritual path. He expressed part of this exuberance in dancing before God as a divine service. The disciples of the Baal Shem Tov were quite taken with his equanimity; he did not seem to care about praise or blame since his mind was always on God. There are many ethical practices in his teachings, including the instructions to speak well of others and to excuse their faults.

We will close with one of our favorite images: "The Baal Shem Tov once told his disciples: A Jewish heart is alive, but a person has to dig within himself to uncover it. It's like digging a well: Sometimes water is discovered immediately, other times they have to dig for a long while and remove a lot of earth before they find the water." Buxbaum has done us all a wonderful moral service by revealing the depth dimensions of a warm heart. Reading this master work, one bows down in praise of the Father of Hasidism whose legacy has not diminished with time, but only grown more expansive and profound. 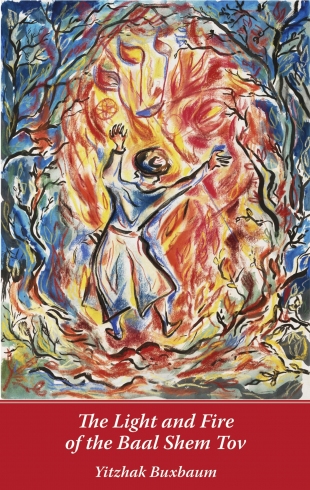