By Philip Gulley
A relaxed and edifying collection of stories demonstrating the art of everyday spirituality with pieces on family, marriage, friendship, simplicity, and more.

Philip Gulley lives in Indiana with his wife and their two sons in a rambling old house. He is a Quaker minister with a healthy and hearty appreciation for what he calls "decency, common sense, and other endangered species." This lively and totally satisfying collection of essays begins with a piece on the value of porches where people used to share stories as they took in the pleasures of each other's company. Gulley recalls sitting on the porch with his grandmother and savoring the "full and rich and comfortable" silence. That is something which seems to be a thing of the past in this age of multitasking and 24/7 jobs.

There is a relaxed quality to this author's writing that is very appealing. In an essay on writing, he notes that the most important thing is to stick with what fascinates you. All of the subjects covered in Porch Talk are dear to Gulley's heart.

A very funny essay deals with a pastor friend who has hired a life coach to help him maximize his potential. When he was growing up, his own mother was the one who constantly gave him advice. Gulley surmises that with the decline of the neighborhood sage, people have turned to life coaches and celebrities to counsel them. He laments the closing of a local hardware store which served as a "sanctuary" for many men in the community who would talk and hang out there. Whereas many solid citizens in the country gripe and carp about paying taxes, Gulley pleads with the government to take his money if it means that his children and grandchildren will not be "afflicted with second-rate schools, third-world health care, shuttered libraries, busted dreams, and broken cities." This stems from his Quaker social conscience and a long-standing tradition of caring about the future.

We enjoyed many of the other essays on friendship, exercise and other dirty words, the family dog Zipper, rocking chairs, simplicity, a mother-in-law who's found contentment, Easter, and "Things I Ponder When Sitting in Meeting." But perhaps the best one of all is "On the Road Again" where he points out the spiritual value of seeing the world afresh:

"I wish I had that gift — to see the world as my home, and not just this little corner of it. I'm working on it, but progress is slow. When I'm on the road, I find myself yearning for the familiar, lamenting where I am, wishing I were elsewhere, namely, home. What a waste of the present that is.

" 'This world is not my home,' the old hymn goes. But the song is wrong. It is my home, all of it, everywhere, and yours too. And the sooner we realize that, the better our world will be." 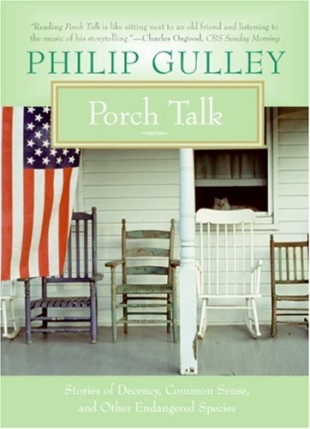