By David L. Weaver-Zercher, Donald B. Kraybill, Steven M. Nolt
A soulful meditation by three scholars on the Amish practice of forgiveness and loving one's enemies.

On October 2, 2006, Charles Carl Roberts IV entered an Amish schoolhouse near Nickel Mines, Pennsylvania, and shot ten girls; five died, and five were seriously wounded. He then took his own life. While the rest of the country responded with shock and anger, the Amish responded with graciousness, patience, and love. Instead of being consumed with revenge, this community lavished forgiveness on the killer's widow, her parents, and the killer's parents. The news media were astonished at this spontaneous and heart-felt response. Some editorial writers wondered why more Christians did not see forgiveness as a major practice in their lives. Others opined that a hatred of evil called for a more stern and judgmental reaction.

The Fetzer Institute provided research funds for Amish Grace as part of The Campaign for Love & Forgiveness. The authors are Donald B. Fraybill, senior fellow at the Young Center of Elizabethtown College; Steven M. Nolt, professor of history at Goshen College; and David L. Weaver-Zercher, associate professor of American religious history at Messiah College. These three scholars have all written extensively on Amish society, history, and culture.

This book is based on conversations with more than two dozen Amish people in the Nickel Mines area, including family members of the murdered children. They also spoke to relatives of the gunman. The authors scanned hundreds of media stories and editorials on Amish forgiveness and compared these practices with various attitudes toward the subject in the popular culture.

Amish Grace is divided into three sections: the story of the school shootings and the responses that followed the event; a wide-ranging exploration of the habits, the roots, the spirituality, and the practice of forgiveness in Amish life; and a look at the meaning of forgiveness in American society today. Everyone the authors talked to in the community agreed that forgiveness for Roberts and grace for his family was a spontaneous expression of faith and not a mandate from the Amish church. In her column in the National Catholic Reporter Catholic sister Joan Chittister suggested "it was the Christianity we all profess but which [the Amish] practiced that left us stunned." She concluded that the Nickel Mines Amish surprised our world the same way the earliest Christians astounded the Roman world: "simply by being 'Christian.' "

In the most incisive chapter, Kraybill, Nolt, and Weaver-Zercher point out that in the Amish revere forgiveness in twice-yearly worship services and in remembrance of sixteenth-century martyrs who forgave their persecutors. They see Jesus' practice of forgiveness as central to his life and ministry. In addition, the authors note:

"The Amish believe if they don't forgive, they won't be forgiven. This forms the core of Amish spirituality and the core of their understanding of salvation: forgiveness from God hinges on a willingness to forgive others. The crucial phrase, repeated frequently by the Amish in conversations, sermons, and essays, is this: to be forgiven, we must forgive."

The authors go on to explain that this view of forgiveness is supported by Amish spirituality which emphasizes self-surrender, humility, and nonresistance. These values are taught in the home where the individual yields to authority and serves others in the spirit of Christ. Forgiveness means letting go of grudges and resentment. It is practiced again and again so that it becomes a habit.

The Amish have a 300-year tradition that proclaims the necessity of loving one's enemies and they know that "genuine forgiveness takes a lot of work — absorbing the pain, extending empathy to the offender, and purging bitterness — even after a decision to forgive has been made." Kraybill, Nolt, and Weaver-Zercher conclude with a look at how this practice fits in with Amish views on shunning, grief, providence, and justice.

This sturdy book helps us understand the rich cultural resources the Amish bring to the everyday practice of forgiveness. We are thankful to this religious community for reminding us that grace is better than revenge and that loving our enemies is the true miracle that we are all seeking in our daily encounters with others . 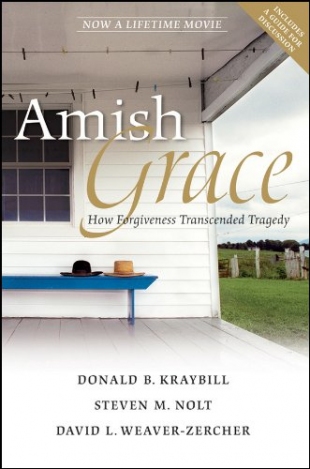