By Kent Nerburn
Keen insights into the dark side of American history, and soul-stirring observations about Native American ceremonies, the Great Mystery, and the spiritual practice of listening.

Kent Nerburn is one of our Living Spiritual Teachers, an exquisite writer, and a creative spirit who can always be depended upon to deliver keen insights into human nature and the meaning of life. In his masterful Neither Wolf nor Dog: On Forgotten Roads With an Indian Elder, he fashioned a powerful drama around his encounters with Dan, a Lakota elder who unflinchingly speaks the truth about Indian life, past and present. Nerburn became the brunt of many jokes as he traveled down dusty roads, visiting reservations, and being exposed to his own prejudices and fixed ideas.

The Wolf at Twilight offers more of Dan's wisdom in a fictionalized account of an actual journey as the Lakota elder calls Nerburn to help him bury Fatback, an old and faithful Labrador who had been a beloved companion during the ninety year old's twilight years. After that is done, Dan asks Nerburn to join him for another important mission: finding his long-lost sister Yellow Bird, who disappeared from a reservation boarding school over 80 years ago. But before they leave, they participate in a sweat lodge ceremony. Nerburn describes the experience:

"I crawled out and fell on the cool earth like a newborn child on the bosom of his mother. . . . Despite my physical depletion, I was filled with an overwhelming sense of peace. I felt like I had gone to the other side of death and returned renewed, refreshed, rebaptized. It was like all the sacraments rolled into one, rising up whole and inseparable from the very center of the earth."

The author needs all the patience and the courage he can muster as he travels with Dan and his friend Grover, a Lakota who went to prison for many years to protect his son. The two Native Americans recount their memories and the experiences of others in Indian boarding schools run by Christians who wanted to make them believers and so tried to take away their own rituals and beliefs. Nerburn flinches as he hears accounts of the school's cutting off the long hair of the Indian children, forcing little girls to sit naked on stoves until they got blisters, hurting little boys by ordering them to kneel on broomsticks, ordering children to eat lava soap if they didn’t know their lessons, and locking disobedient kids outside until they froze to death. Dan sums up:

"It was a hell of a system I tell you, Nerburn," he said. "The government could call it whatever it wanted — boarding school, education, civilizing the Indian, whatever. But it was really just the last big Indian killing. It was the killing of the Indian heart. They killed it by trying to turn it white."

Dan is impressed that his white friend has learned how to handle silences but advises that he still has a lot to assimilate, such as the importance of ceremonies like giving thanks, listening when stones talk, and learning from Charles Bronson, a stray dog Dan adopts on the road. Everything that shows up in our lives is a message from the Creator, says this Lakota elder. When Dan points out that Nerburn must take responsibility for benefiting from the theft of Indian lands, he winces but agrees. When Dan laments that his people have not woken up from the American nightmare, the author sees the ghosts of slain Indian children and women butchered in the name of progress.

Nerburn is honored to have played a role in Dan's quest to find his sister — with a little help from Charles Bronson. Yellow Bird's grave is found, and the Lakota elder can grieve her properly and end a horrific chapter in his life. As a great gift Dan passes on this bit of wisdom:

"We must stop looking at life as if we humans are at the top of everything. There's spirit in everything, not just in people. If the Creator made it, there is spirit in it. And if it has spirit in it, it has a part to play in creation.

By the end of the journey, Nerburn has gathered the many pieces of light and dark and put them into his heart. As they feast on spam sandwiches, Dan remarks: "It's a good day to live." Charles Bronson wags his tail in delight, and we are all satisfied and replenished similar to the feeling we have after a plenteous Thanksgiving meal. 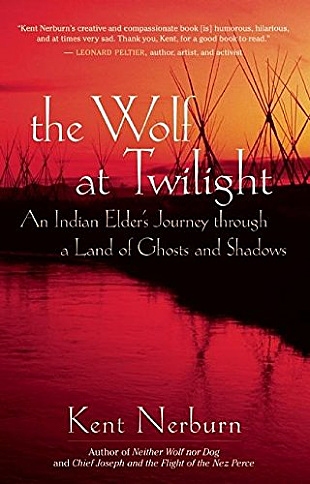